Time travel movies can be a real mindf--k. The rules of storytelling and logic often don't apply. That said, Rian Johnson's sci-fi actioner "Looper" is a movie that will leave the audience divided in awe or confusion ... we're going with the former!

The story revolves around a hired gun named Joe (a prosthetics-laden Joseph Gordon Levitt) living in the year 2044. Time travel in controlled by black market dealers who employ "loopers" like Joe to dispose of their enemies.

The hits are methodical: targets "appear," Joe dispatches them with his blunderbuss, then collects his payment strapped to their bodies. His routine -- and life -- are shattered when his latest would-be victim turns out to be his future self (a thankfully wigless Bruce Willis). 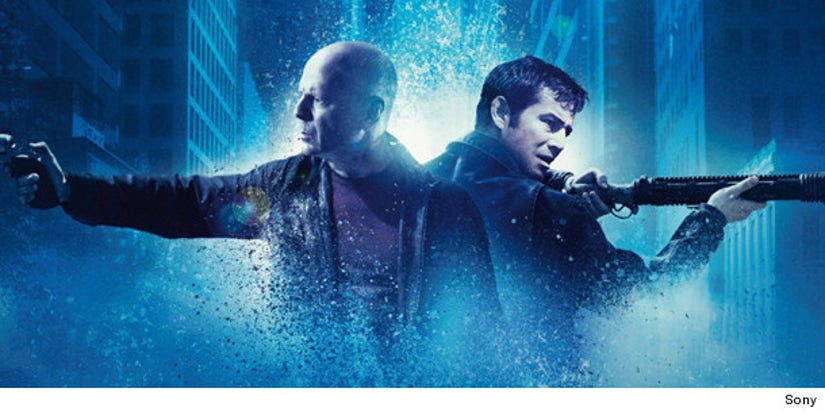 Future Joe manages to survive the hit and flee. Joe must track down his older self, which isn't easy -- Future Joe develops memories of events as they occur. But as with all time travel movies, changes in the past affect the future, so Future Joe can't rely on what he remembers. Crazy, huh?

JGL and Willis are stellar playing the conflicted Joes. It's interesting to see the older Joe interact with his younger self. The character is engaging because the motivations and actions of each make it hard to distinguish if they are truly good or evil. JGL pulls off the squinty mannerisms and cool demeanor of Willis, but when the two share scenes, Willis dominates as the ferociously determined and instinctively wiser aged Joe.

The supporting cast gets the job done. Jeff Daniels plays a lax gangster from the future who's pulling all the strings in the present day. Emily Blunt is convincing as a tough single mother who has secrets of her own, but the real standout is child actor Pierce Gagnon, who plays her son Cid. His expressions and timing are superb.

Writer/director Rian Johnson has done an amazing job crafting an original story that is layered with complex characters, all while trying to make the logic sound. While "Looper" will draw comparisons to "Blade Runner" (for its noir-ish setting) and "Twelve Monkeys" (simply because it's another Bruce Willis time travel movie), it distinguishes itself with brutal action, glossy effects and an unpredictable plot.

Some viewers may struggle with suspension of disbelief, and the paradoxes that arise from time travel create flaws in logic and plot which cannot be ignored. The film also diverts from time travel into some other science fiction elements that are core to the plot, but we won't bring them up here.

For some, it may be too much, but it's refreshing to have a movie pick your brain while also stimulate it. Looking for something that requires a little less brain power? Check out "Here Comes the Boom" instead.

When taken at face value, "Looper" does its best by closing the loops (pun intended), keeping the audience guessing and providing great escape for an always dull September.

By Tyler Harrell and Lawrence Yee