When we first saw the trailer for the new comedy "Pitch Perfect," we couldn't be more excited -- Oscar nominee Anna Kendrick, "American Dreams" hottie Brittany Snow, and the amazingly brilliant Aussie Rebel Wilson, starring in a tongue-in-cheek comedy about college a cappella groups? Sign us up!

Thankfully, we weren't disappointed. The flick delivers all of the cheesy, fun moments you could hope for, along with some over-the-top comedy and pretty great musical numbers. Oh, and the cast is hysterical.

toofab got a chance to sit down with several of the stars from the film, where we discussed karaoke, nudity, malaria (yes, malaria), and we laughed. A lot.

Brittany: "'[No Diggity]'s always been my karaoke song, so when I heard that that song was in [the movie], I called all my friends at home you guys will never guess what I have to sing! ... I was so jealous that [Anna K.] got to to do the rap part, there might be some takes of me in the background [mouthing the words]."

Anna K.: "I don't really sing karaoke..."
Brittany: [flabbergasted] "Oh, this is happening."
Anna K: "Maybe like Cake's version of 'I Will Survive.'"

Skylar Astin: "I rap. I have to do 'Forgot About Dre,' some Beastie Boys 'Sabotage,' something where I'm just screaming violently by the end ... and then I have another drink and I do 'My Heart Will Go On.'"

Nakedness
Anna K. and Brittany share a funny shower confrontation scene ... in which they're both stripped down.

Brittany: "We were like, pretty naked."
Anna K.: "Can I just say, [I'm a] lucky lady [getting to see Brittany]!"
Brittany: "There was so much talk about that scene before we did it and we wanted to be completely covered and taken care of."
Anna K.: "We were in this room getting changed into our little things that would keep our bits covered and I was feeling pretty uncomfortable."
Brittany: "It was like 'Hey, you're my friend...' but then when we were doing the scene we were in an actual guys' legitimate shower."
Anna K.: "It was like hot and humid and muggy and gross. So by the end of it they were like 'Ok ladies, do you want your robes back 'cuz we just cut?' and we're like 'I'm fine!' By the end of it I basically knew every inch of this woman's body." 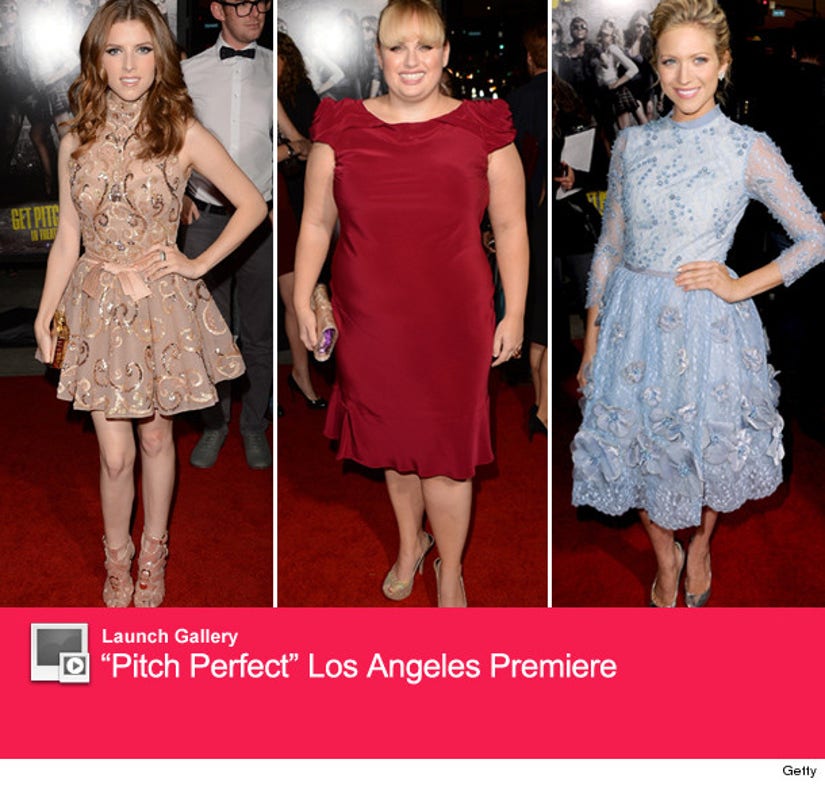 Thank goodness for malaria!
Who knew we had some disease-infected mosquito to thank for the hilarity that is Rebel Wilson!

Rebel: "When I finished high school I was a Youth Ambassador for Australia, I didn't think I would be an actor.

I got malaria really badly, and during that time I was in Intensive Care I had this hallucination that I was an actress and that I was really, really good.

It was so strong, when I came out of the hospital I started saying 'I'm gonna be an actress!' People thought I was crazy, they thought the disease had really affected me, made me crazy, mad.

I said 'No, I've just got a feeling I could be really good!' My whole family were like 'No, no one's gonna pick you for movies!' but I was like 'One day they will!'"

And she was right. The 26-year-old's part as Kristen Wiig's roommate in "Bridesmaids" was created just for her after a hysterical audition, and within two weeks of that movie's release she'd booked five other films ... including this one.

See Rebel and the rest of the cast in "Pitch Perfect," in theaters this Friday. Warning: you will laugh.