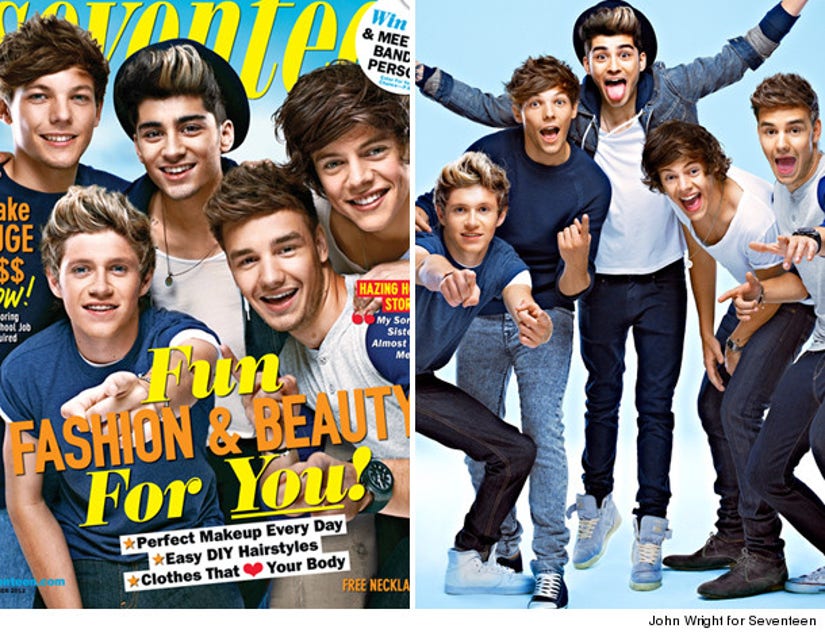 One Direction has already taken over the world, and now the boyband takes over the November cover of Seventeen magazine!

In the latest issue, which hits stands October 16, the group talks girlfriends, gossip, bullying and even share some of their most embarrassing moments.

Harry Styles -- who's known as the "girl-crazy" one -- says that he just likes to have fun. "I wouldn't say girl-crazy, because that makes me sound like a bit of a womanizer. That isn't really me. But I am quite flirty – maybe too flirty. I am an 18-year-old boy, and I like to have fun!"

Zayn Malik has a reputation, too. Of his "bad boy" reputation, Zayn says, "I like to use the term misunderstood. But I am a bit of a bad boy. I have tattoos and I mess around. That's part of my image, so it's cool."

Niall Horan, who's rumored to be dating "X Factor" judge, Demi Lovato gushes about the "Skyscraper" singer in the mag.

“The nice thing about Demi is, once you know her, she's really, really beautiful. We became good friends. It's so crazy that she can be so honest about everything she's gone through.”

He explains, "If I ever needed anything or needed to talk to anybody, I think Demi would be the person to talk to."

Even though the group has millions of fans, they still get embarrassed like the rest of us!

“One time Harry and I were skiing together when a girl and guy came up with a camera. We assumed they were going to ask us for a photo, so we stood there with our arms around each other, posing. They said, 'No, we want you to take a photo of us!' It was so embarrassing,” Louis Tomlinson confesses.

For more on the guys from One Direction, and the chance to meet them in-person go to www.seventeen.com/onedirection and pick up the November issue of Seventeen, on newsstands October 16th!

Also, make sure to check out the group's new album "Take Me Home" which hits stores November 13th.