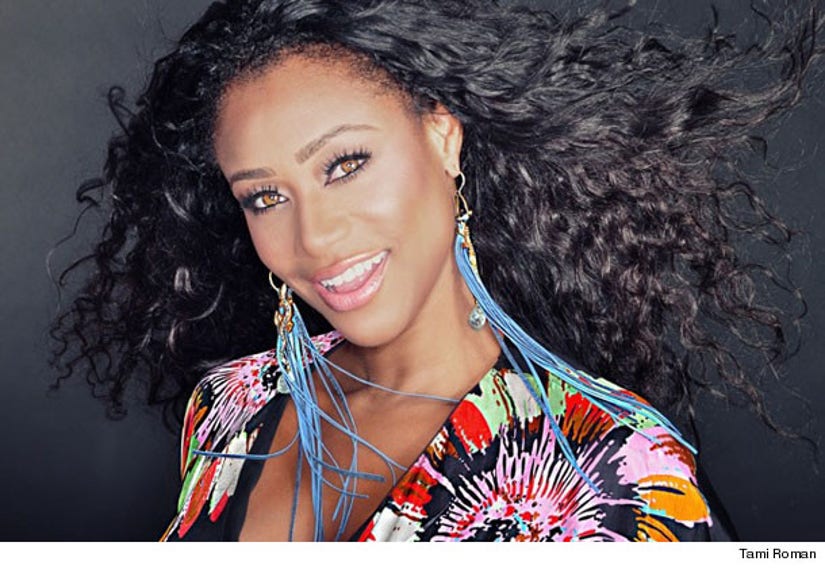 Tami Roman has spent the better part of her life in the spotlight. The 42-year-old actress/reality star was part of MTV's seminal "The Real World: Los Angeles" cast in 1993 and joined VH1's "The Basketball Wives" in 2010.

In a candid interview with toofab's Lawrence Yee, Tami talks about her weight loss, the "Wives" and her incident with costar Kesha Nicols.

toofab: You've publicly struggled with your weight but have recently been winning the battle. Tell us about it.

Tami: I was a very heavy smoker. When I decided not to smoke anymore, I started eating and ballooned all the way up to 185 pounds. I looked at myself one day and I said, "No this is not cute. You've got to get it together." I started researching products that would help me suppress my appetite. And I'm real big on research and I settled on a product called NV primarily because they were the only product that offered mango seed. I've done research on mango seed and it's basically an antioxidant.

Coming from years of smoking, I wanted something that would help clear my body of toxins as well as suppress my appetite. So I started popping pills and the first week I actually lost 7 pounds -- this was without me changing anything. I still didn't have healthy eating habits at the time and I still wasn't exercising. I asked myself what would happen if I became a little more diligent in the process? So I started incorporating 15 minutes a day of just light walking and the second week I lost 5 pounds. And I was like, "Oh gosh, I'm hooked on this now." I stopped talking the supplements and I started using a product called NV Sprinkles which you sprinkle on your food and it keeps you from eating everything. And then a few more pounds came off. Through the whole journey I've lost 25 pounds.

I'm very excited about it because for a long time I was the big chick on the show. A lot of the girls have great bodies but that wasn't who I was as a person. If people research me and go back I've always been a thin person because I'm tall. And I wanted to get back to that and get back to that lifestyle. The product worked and I've been going strong ever since.

toofab: How have your family and friends reacted to their transformation?

Tami: Everybody has been very supportive. They love the way that I look. They're like, "Oh my gosh, you're so skinny!" So that makes me feel good. My daughter and I went to the VH1 Do Something Awards. For years you go to a stylist and you have them pull stuff for you. And I always dreaded they wouldn't have a size 14. For the first time I was able to wear 6s and 8s. I actually wore a size 6 dress to the Do Something Awards. So I was very happy about that.

toofab: Let's switch gears and talk about "Basketball Wives". What can you tell us about the upcoming season [filming on Season 5 just started].

Tami: I'm excited about it because the show has the tendency to border on the dramatic aspect of our lives. This particular season we're getting more into our families, the positive things we're doing, creating a balance for the show. Last season was particularly hard for me because of the things we went through. It is reality TV and one moment that happens for 15 minutes is stretched out for 4 weeks of our lives.

toofab: Some fans labeled you as a bully during your incident with Kesha. Was it editing or do you own up to it?

Tami: Let me take responsibility for my actions. I did what I did. I don't take pride in taking on a weaker opponent because that's not who I am as a person, so I was a little upset about that. But I took that opportunity to learn and grow. What I mean by that is I don't consider myself a bully. Anyone that knows me knows I will give the shirt off my back; I'm a very loving person.

I always thought bullying was big kids picking on small kids. I had a bullying moment and I was pushing someone who wasn't ready for that confrontation. I own up to that but me as an individual, that's not how I go through my life. There's a saying that your intentions may be good and still the wrong things will happen. In all honesty, I just want Kesha to stand up for what she said and own up to the things that kept pushing her to do that but that's not in her makeup. And so because of that I had a bully moment and not being able to recognize that she's not that type of person she was, she was never going to do and I should have stopped pushing.

toofab: How are things with you and Kesha now?

Tami: I apologized to Kesha in written word and to her face. She can accept it or not accept it. I think the bigger picture was for me to own up to what I did to the young lady, acknowledging it was wrong, and making that apology. From that I'm able to move on and say okay Tami, when you're learning how to deal with people, this is something that you can't do. You have to be able to recognize the person you're speaking with and where they're coming from and step into their shoes. You have to acknowledge that when you're dealing with someone when they're not ready to have that moment you have to accept that.

toofab: You're coming up on your 20th anniversary of being on "The Real World." Has reality TV changed? For better or worse?

Tami: We were definitely the pioneers of the reality tv genre. We set up this whole phenomenon that it's become. The biggest difference for me is that when we did the “Real World” it really was the real world. We lived our lives as real world situations presented themselves and we dealt with them in a real way. I think other reality shows sometimes people may not be as real as they would be, you have those shows like that. You have shows that border on the drama of the moment, which is like "Basketball Wives" where the moment isn't played out in real time.

And there's the social media aspect. When I was on "The Real World," if you didn't like what I did you had to sit down and write me a letter. And now everything's on Twitter, blogs, Facebook and people are able to comment on it. So that has to be the largest difference since when we started til now. People are judgmental and people don't understand that things are edited things are played out over 4-5 weeks and everybody in the situation has moved on and you have to keep reliving it week after week. I would say that's the hardest and biggest difference.

toofab: What's next for you?

Tami: There's so much going on right now. I booked a role as a series regular on a new show on TV One called "Belles." And that'll be coming soon and people will actually see me doing what I love to do. I've got a lot of endorsement situations that will be announced in the future. I'm working on my book and just a lot of different positive things.

One thing I'm passionate about is my charity, Project Girls. It's a charity out of NYC that focuses on children having a safe base to talk about their lives and using the art of acting. I'm very excited about that. I'm involved in another project that's using celebrities that I've become friends with to encourage their fans and followers to be something positive. So that will be introduced on this season of "Basketball Wives."

For more on Tami, be sure to check out her official website here.