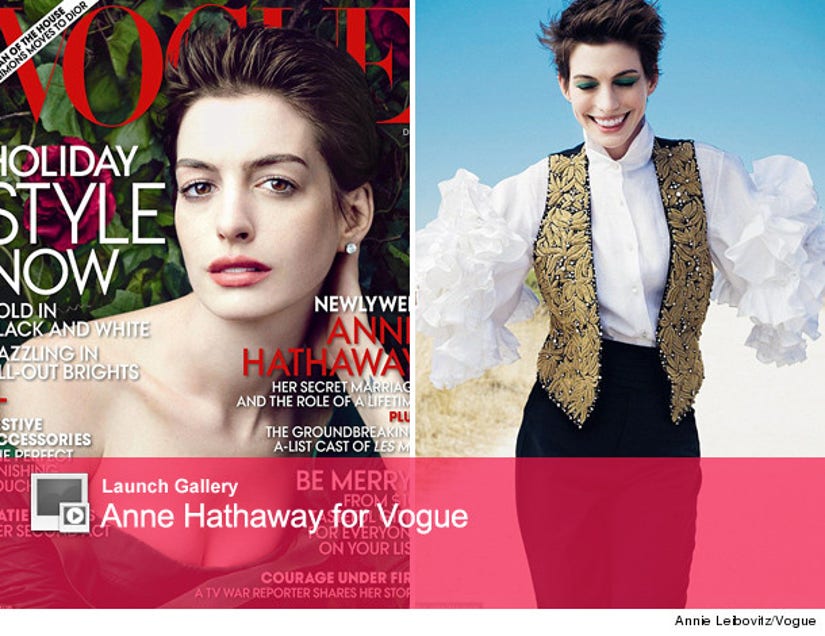 Anne Hathaway turns 30 years old today – and the newlywed is on top of her game!

Hathaway graces the December cover of Vogue where she opens up about weight loss, short hair and her milestone birthday!

The brunette beauty filled some big shoes stepping into the role of Catwoman in "The Dark Knight Rises," but Anne says she finally landed the role of a lifetime ... and nothing was going to stand in her way from starring in "Les Miserables" (especially a few lbs!).

Preparing to play the part of dying 19th century prostitute Fantine -- Anne who was already super fit from her catsuit weight loss -- shed an additional 25 lbs from a diet consisting almost completely of oatmeal paste.

“I had to be obsessive about it – the idea was to look near death,” Anne confesses to the mag.

Aside from starving herself for the part, Hathway also shaved all of her hair off … but she's not complaining!

“I love the short-haired lifestyle,” Anne says, telling Vogue that the only downside to her pretty pixie cut is getting it trimmed every three weeks.

But with a doting husband (Anne married jewelry designer Adam Schulman in September), a role of a lifetime, and a milestone birthday – the "Devil Wears Prada" actress is happier than ever.

On turning the big 3-0, Anne admits “I hope this isn't obnoxious to say – I feel prettier, and much more myself. I guess I just feel much more satisfied with less now.”

Check out Hathaway's singing chops in the trailer for “Les Miserables” below, and click “Launch Gallery” above to see all the photos from her shoot. Also make sure to pick up the December issue of Vogue when it hits stands November 20th.