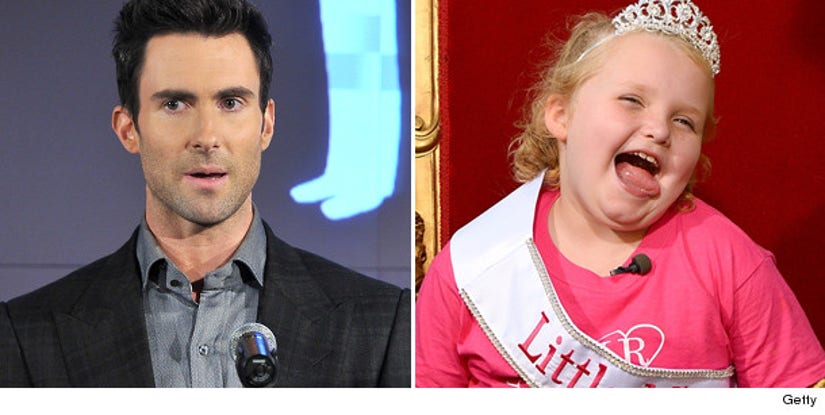 Adam Levine is definitely not a Honey Boo Boo fan.

While "Here Comes Honey Boo Boo" is a ratings bonanza for TLC, the "Voice" coach clearly isn't one of the millions watching -- as he tears into the reality show in the new issue of GQ.

"Seriously, Honey Boo Boo is the decay of Western civilization. Just because so many people watch the show doesn't mean it's good," Adam tells the mag. "So many people witness atrocities and can't take their eyes away from them, but that doesn't mean they're good. That show is literally The. Worst. Thing. That's. Ever. Happened."

"It's complete f**king ignorance and the most despicable way to treat your kids," he continues. "F**k those people. You can put that in the magazine: F**k those idiots. They're just the worst. Sorry, I'm so sensitive to that -- like, I don't know, man, it's upsetting. Just to clarify, I said, 'F**k those people!'"

The little beauty queen isn't the only one to feel Adam's wrath though.

The Maroon 5 frontman recently trashed The Roxy on his show and memorably bashed "Keeping Up with the Kardashians."

"I like artfulness. I don't need to watch someone go to the f**king supermarket, who gives a s**t? Why would you ever care about that, you can go do that yourself," he said back in March.

What do you think about Adam? Should he keep his opinions to himself ... or do you agree with him?