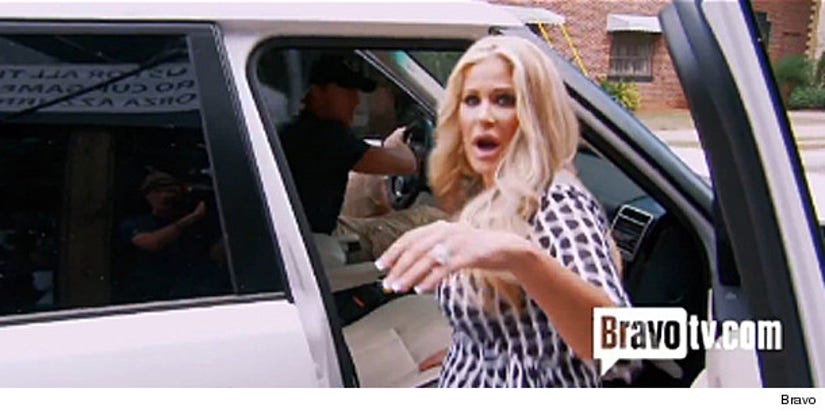 Kim Zolciak -- one of the original "Real Housewives of Atlanta" -- quit the show Sunday night in an expletive-filled huff.

After the other housewives called her out on making excuses and backing out of events (including a planned trip to Anguilla), the buxom blonde declared "I'm done with this whole thing," removed her mic, and hurried out.

Both Kim and her husband Kroy Biermann were seen getting physical with the cameramen trying to document her exit. Watch her dramatic departure:

Kim later took to her Bravo blog to explain why she quit:

"Traveling 32 weeks pregnant is such a scary risk and for the women to think that I was willing to take that risk FOR THEM is absurd, especially since I don't consider them my friends," she wrote. "Bravo and RHOA have been beyond good to me, and I will be forever grateful for some of the moments that occurred on the show, but I couldn't deal anymore. I handled my sh-- for five seasons, from fights, to arguments to the tears, but being pregnant puts a whole new spin on everything, and what happens on the outside affects what happens with the baby on the inside, and that was my priority!"

Kim isn't the first "Real Housewives" star to leave during filming -- New Jersey's Dina Manzo left in the middle of Season 2, and the Orange County cast has also gone through numerous midseason changes.

With Kim's departure, NeNe Leakes is the sole remaining original Atlanta housewife, which she gloated over to toofab:

Will you miss Kim on "The Real Housewives of Atlanta"? Vote below: