Nominations for the 70th Golden Globe Awards were announced (bright and early) Thursday morning, and while a lot of nods in the major categories were expected, there were a ton of surprises and more than a few snubs. 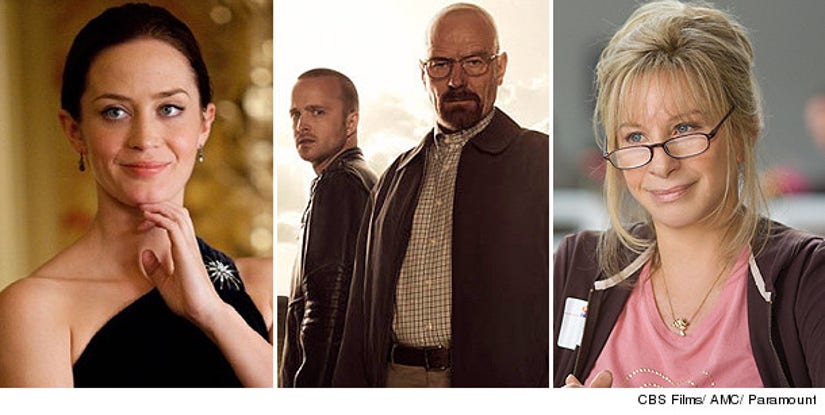 - Ever heard of a little movie called "Salmon Fishing in the Yemen?" Well, you will now! The British romantic drama snagged a surprising 3 nominations, Best Picture -- Musical or Comedy, Best Actor for Ewan McGregor and Best Actress for Emily Blunt. Good movie, terrible title. Got it.

- Richard Gere earned a Best Actor nod for his role as a troubled hedge fund magnate in "Arbitrage." That nom was expected to go to Sir Anthony Hopkins for his portrayal of famous film director Alfred Hitchcock in "Hitchcock." (Hopkins was Hannibal Lecter. We don't know about you, but we'd be afraid to snag anything from him.)

- As for TV, it appears the HFPA has finally boarded the "Breaking Bad" train! The amazing AMC drama earned its first Best Series nod, in addition to a Best Actor nomination for Bryan Cranston. (We still wish Aaron Paul earned a Supporting nom.) Love our favorite meth dealers...

- "Smash" came out of nowhere and scored itself a Best Series -- Musical or Comedy nomination, which has left many wondering ... what?! The show is incredibly uneven and dare we say, over dramatic, and this nom once again left gut-busters like "Parks and Recreation," "30 Rock," "Community," "Louie" and the newbie "Veep" out in the cold.

- Yay Max Greenfield!! We love Schmidt on "New Girl" and are so happy that Max was honored with a Supporting Actor nom.

- The Hollywood Foreign Press loves having stars at their show, so it's surprising that they overlooked Barbra Streisand's comedic turn in "The Guilt Trip." The legend rarely acts these days and we thought for sure they'd want Babs gracing their red carpet. (Note: This year is also a Brad Pitt, Angelina Jolie, George Clooney, Ryan Gosling-less show. Who will we ogle?!)

- Quevenzhane Wallis, the highly acclaimed 9-year-old star of "Beasts of the Southern Wild," was surprisingly left off of the Best Actress list.

- "Les Miserables" and "Silver Linings Playbook" are two of the most buzzed about films of the season, and each earned four Globe nominations -- but their respective directors, Tom Hooper and David O'Russell, were not included.

- Larger-than-life films "The Dark Knight Rises," "Skyfall" and "The Hobbit" earned a total of 1 nomination among them, and that was just for Adele's Bond theme song.

- On the TV side, "Mad Men" received a nom for Jon Hamm ... and that's all! This is the first time the series didn't receive a Best Series nomination, having won 3 of the last 4 years. "American Horror Story: Asylum" was also shunned from the Best Series race, only earning one nod for Jessica Lange.

- "Game of Thrones" star Peter Dinklage won the Best Supporting Actor award last year, but wasn't nominated at all this time around ... nor was the show. At all. In any category. Say what?

- "Sons of Anarchy." Anyone? Is this thing on ... ever? Though apparently show creator Kurt Sutter isn't too worried. He tweeted: "there are no snubs, kids. play the love angle. congratulate. i woke up breathing and my p***s is still huge. all good, baby." So there we have it.

- With his nod for Best Original Score for "Lincoln," composer (and longtime Spielberg collaborator) John Williams has now racked up a whopping 24 Globe nominations ...but he stills lags behind Meryl Streep! The legend just earned a Best Actress nomination for "Hope Springs," bringing her nomination total to 27, the most of anyone ever! She also has the most competitive wins with 8.

- It was announced that there will be both a Miss and Mr. Golden Globe this year! Francesca Eastwood, daughter of Clint Eastwood and Frances Fisher, was previously announced Miss Golden Globe, and joining her on stage to hand out trophies will be Sam Fox, son of Michael J. Fox and Tracy Pollan. It's like Golden Globes prom, cute!

For the full list of nominees, click here. What were your biggest surprises or snubs? Sound off below!