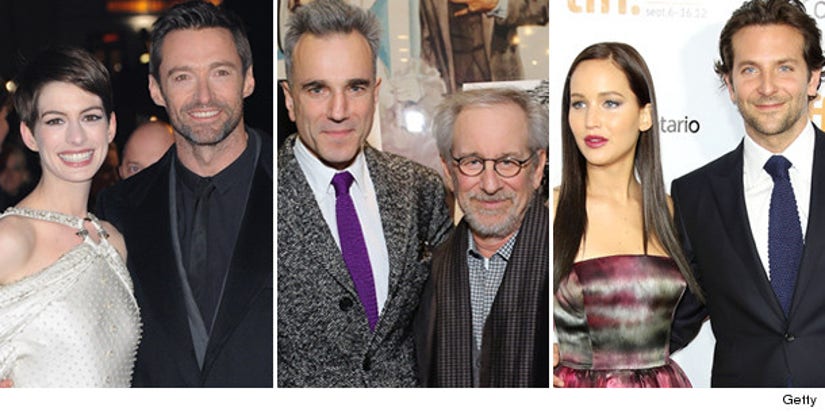 Speculation about who will score Hollywood's most coveted golden statue starts earlier and earlier every year. Remember this summer when "The Dark Knight Rises" was the best film of the year? Oscars' Jan. 10 nominations are now less than a month away and this morning's Golden Globe contenders list marks the fourth (in some cases five) round of nom announcements for the year's best picture contenders. Which means the favorites are already beginning to separate from the pack.

There's little to no doubt "Les Miserables" will be shown a ton of Oscar love come Februrary 24, 2013. The star-studded musical has garnered a combined 19 nominations between the Golden Globes, Screen Actors Guild and Critics Choice Awards. The only picture beating it is "Lincoln," which nabbed 24 nominations from the big three awards committees (it's 13 Critics Choice entries broke the awards show's record). Nipping at their heels is David O. Russell's "Silver Lining's Playbook" with 18 total nods from the GG's SAG and CC's. The smaller picture also led the Independent Spirit Awards pack with five nominations (both "Les Miserables" and "Lincoln" are too big budget to compete).

In that vein, expect to see stars Hugh Jackman, Anne Hathaway ("Les Miserables"), Daniel Day-Lewis ("Lincoln"), Bradley Cooper, Robert DeNiro and Jennifer Lawrence ("Silver Linings Playbook") receiving recognition from the Academy for their performances. With no Brad Pitt, Angelina Jolie, George Clooney or Ryan Gosling star-ers in the running, Oscars' red carpet may not be as A-list as year's past -- though Ben Affleck still has a shot at a Best Director nod for "Argo."

But the race isn't won yet. If you're checking off a "Films I Must See Before The Oscars" list, be sure to include the inside story of Osama Bin Laden's death "Zero Dark Thirty," Iran hostage thriller "Argo," Scientology take-down "The Master," the uplifting tale of a special orphan "Beasts of the Southern Wild" and dark horse, Quentin Tarantino's slavery Spaghetti Western "Django Unchained," who got snubbed by the Screen Actors Guild, but scored five Golden Globe noms this morning keeping its golden statue chances alive.

Here's a list of the current nomination standings for the year's best picture awards contenders:

Which film do you think is going to take home the big prize? Tell us in the comments!