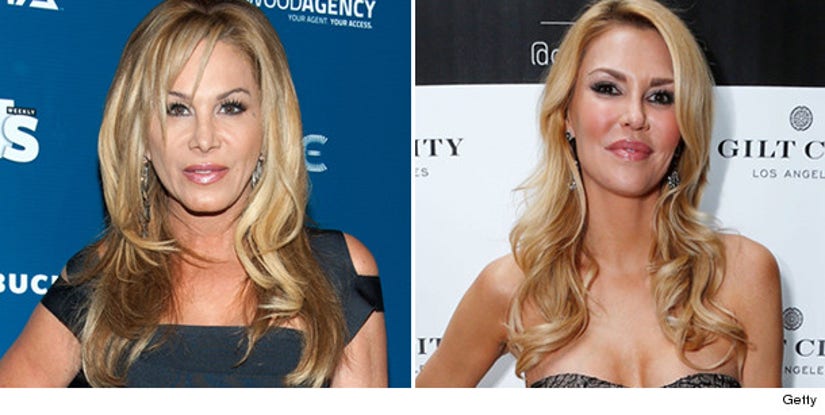 The battle between "Real Housewives of Beverly Hills" stars Adrienne Maloof and Brandi Glanville is definitely real ... and now we finally know what it's actually about.

The war started on an episode of the Bravo reality show, when Brandi blurted out a secret about Adrienne during a dinner.

At the time the show aired, the network edited out what Brandi really said though -- so viewers were left wondering what actually happened.

Many speculated that Maloof had two of her three children via surrogate, rumors that Adrienne is now confirming in an interview with Life & Style.

"I would think Brandi, being a single mother, would have a heart and understand my feelings, where I'm coming from," Adrienne says.

The 51-year-old mom -- who's currently dating Sean Stewart -- was planning on telling twins Christian and Colin the truth when they were older.

"Brandi took away something so precious from our family," adds Adrienne. "Brandi did destroy our family. Right now I'm really hurt and upset, especially because I've stuck up for Brandi as a mother in the past."

Despite the firestorm her comment made among the "Housewives," Brandi has no regrets.

"I don't think there's anything wrong with what I said. We all knew it already," she tells the mag. "She would always lie about it. It's not that big of a deal. They're still your children, just somebody else had to carry them."

While we usually back Brandi and her sometimes brutally honest ways, she may have crossed the line this time ... what do you think? Sound off below!