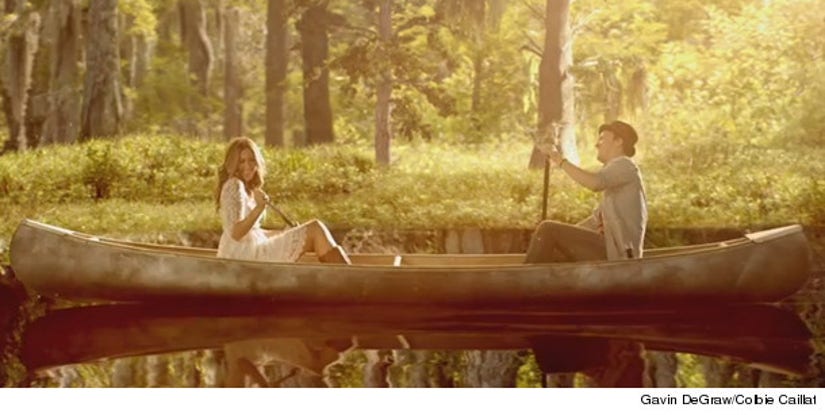 In celebration of "Safe Haven" hitting theaters on Valentine's Day, toofab's Brittany Kyles sat down with Gavin DeGraw and Colbie Caillat who dished on their latest single, "We Both Know."

The twosome's ballad (which has become an anthem for the movie) is about finding yourself before you can be with someone else. This is the second duet for Colbie and Gavin who've not only collaborated together, but collectively toured this past summer.

Gavin added, “It's a matter of hearing the story, getting an idea of the premise of the film, and knowing at the same time as well, that you have to own it. We found our own way in there, our own story within the story.”

Check out their music video for "We Both Know" below:

The pair also worked together on a track from Colbie's Christmas album, "Baby, It's Cold Outside," and they want to continue to collaborate -- we may even see full-length album from them coming soon!

“We've talked about it,” Colbie replied about the possibility. Gavin elaborated, “I'm definitely into that. We spent the whole summer together, sharing the stage and playing shows together. I really think that we just gel in an unusual musically specific way.” He added, “It's just a very natural fit.”

Sharing stories about their onstage chemistry, Colbie confirmed, “Yeah, so we might do something like a collaboration CD at some point.”

Gavin's not the only singer/songwriter Colbie's lent her talents to – she's also sung with Jason Mraz, Common and Brad Paisley.

When asked if Gavin has any other artists in mind he'd like to do a duet with, he admitted he only has ears for Colbie.

“Colbie is the best at duets. There are a lot of guys that want to sing with Colbie Caillat​. Colbie's voice is a voice that I know I blend really well with, it would be tough to find the tonality, the particular timbre that someone has in their voice to let them blend correctly with your voice,” he said.

Both Gavin and Colbie sing about love, loss and everything in between – and like Taylor Swift, they too use past relationships as inspiration (and material) for their songs.

“There's always your personal story in there," Gavin added. "I try to be very specific in a way that allows a lot for people to understand where I'm at, and it's odd that the more specific you get the more people can relate a lot of the times.”

Check out the trailer below and make sure to see "Safe Haven," the latest film adaptation from Nicholas Sparks, in theaters Valentine's Day!