Photos By TooFab Staff | February 12, 2013 2:55 PM
Mila Kunis is finally opening up about her relationship with former "That '70s Show" co-star and friend, Ashton Kutcher.

The brunette bombshell graces the March issue of Allure magazine where she gets candid about her beau, dropping weight and showing side boob. Yes, you read that right.

When asked about settling down with Ashton, Mila admits that she sees him in a new light. "People change," she tells the mag. "So who you knew years ago is not necessarily the person that you [know now].... And who somebody was yesterday is very different from who they will be tomorrow." 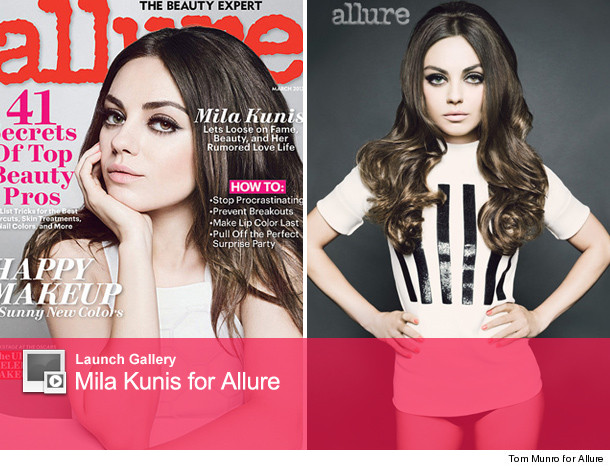 The actress also gets frank about her work too -- how far she'll go for a role, whether it's losing weight ("Black Swan") or showing skin ("Friends with Benefits").

For "Black Swan," the 29-year-old tells the mag that she needed to get "fit and bony." She adds, "Unfortunately, the only way I could play a ballerina was to look like a ballerina." Measuring in at just 5-feet-tall, Kunis had to drop 20 pounds for the role, bringing her weight down to just 100 pounds.

On media scuritny that she was getting "too skinny," the "Ted" actress tells the mag, "People took that story and f------g flew with that one, too."

And you won't be seeing Mila in her birthday suit on the big screen any time soon! Kunis opens up about her sex scene in "Friends with Benefits" with Justin Timberlake: "I showed side boob. I don't need to show a--." She adds, "You get one or the other. You don't need both."

It's nice to see someone with some values in Hollywood. Make sure to pick up the March issue of Allure on stands Feb. 19. Click "Launch Gallery" above to see more sexy photos from her shoot!