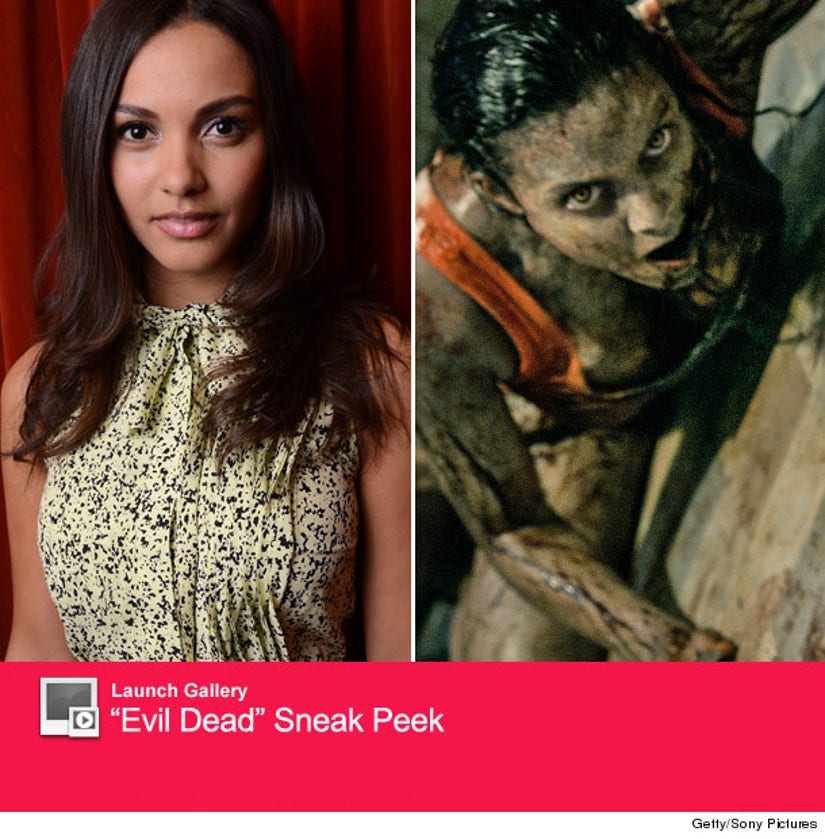 Hard to believe, but yes, those two photos above are of the same actress.

Jessica Lucas stars in the upcoming "Evil Dead" movie -- and while she's a naturally gorgeous human being in real life, some really nasty things happen to her as she transforms from living to the living dead in the new flick.

Trust us when we say this movie isn't for the squeamish, as Lucas' character is seen slicing off her own face. And no, that's not a spoiler ... just watch the trailer!

Jessica talked to toofab's Brian Particelli at WonderCon in Anaheim over the weekend, where she described the process behind playing dead.

"I was really anxious, how do you be a zombie?," she tells toofab. "That's not something you prepare for as an actor, you don't really know. "

"They had a movement coach come in and teach us all different ways to use our body and how to find out own unique Deadite," she continues.

For the uninitiated, Deadites are those who have been possessed by evil spirits in the "Evil Dead" world.

"It was physically taxing, we were all really uncomfortable," says Jessica. "You're covered in blood and prosthetics and makeup. It was so worth it though, it was so amazing."

And while Jessica had it bad, that was nothing compared to her costars, Jane Levy.

"Jane, by far [had it worst]," Jessica adds. "Jane spends 90% of the movie covered in prosthetics and just awful stuff."

"I remember watching her going, 'Oh my god, I'm gonna have do that soon and it's not gonna be fun."

Check out a sneak peek at Jane's creepy transformation in the clip below. It ain't pretty!