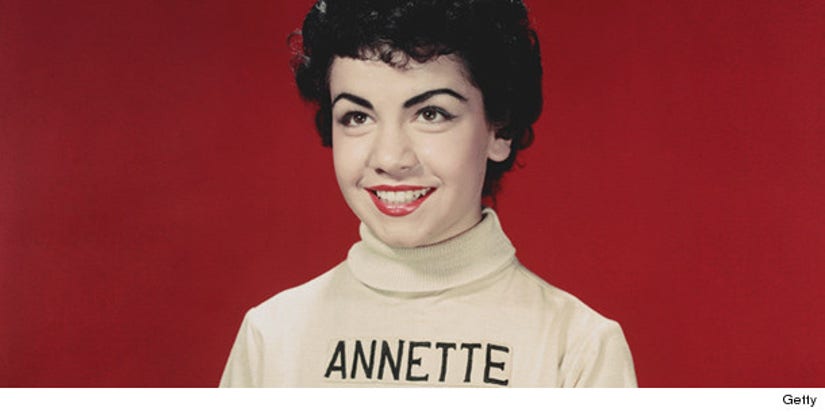 Annette Funicello -- the darling of "The Mickey Mouse Club" and star of many '60s beach movies -- has died at age 70.

In 1992, Annette went public with the news she was diagnosed with multiple sclerosis, which robbed her of her ability to walk and eventually talk. Extra reports she died in a Bakersfield hospital after being in a coma due to MS.

Annette had three children with her first husband Jack Gilardi, and married her second husband Glen Holt in 1986. Holt was her primary caregiver throughout her battle with MS, and their life was featured on CTV's W5 last year. Check out the powerful documentary here.

Annette's daughter Gina Gilardi just released this statement: "She's on her toes dancing in heaven... no more MS. My brothers and I were there, holding her sweet hands when she left us."

See what her famous fans had to say on Twitter:

Britney Spears ‏@britneyspears
I am DEVASTATED to hear about the passing of Annette Funicello. She was a role model for me during my days as a Mousketeer. #Heartbroken

Lance Bass @lancebass
"Now it's time... to say goodbye" to Annette Funicello - my favorite Mouseketeer ( After JC and Justin of course) Trading in the ears for a halo. You will be missed!

Paula Abdul ‏@PaulaAbdul
I'm truly saddened by Annette Funicello's passing. She was an original Mouseketeer and an original talent all-around.

Dana Delany ‏@DanaDelany
Annette. You were a dream girl in saddle shoes.