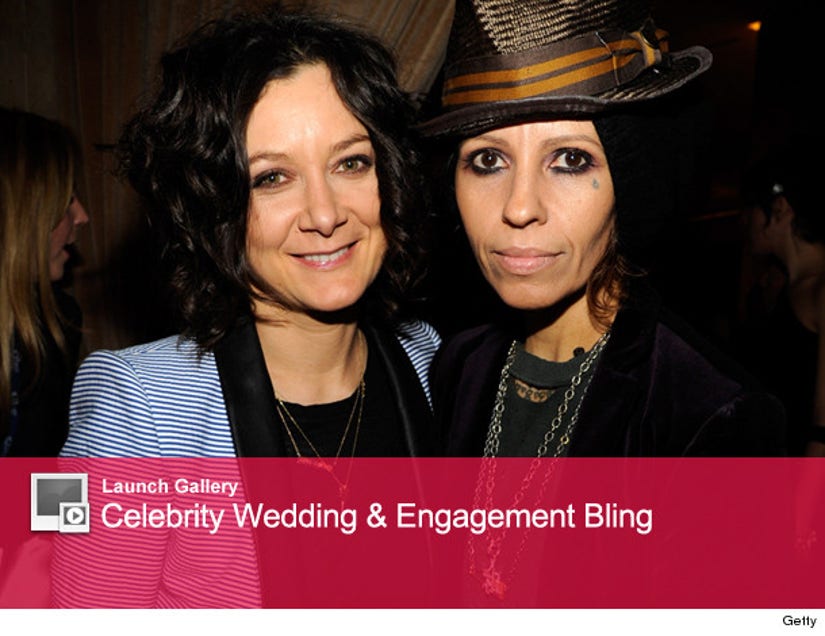 On Monday, Sara spilled the news on "The Talk" telling her costars and their live audience that the engagement happened a week ago.

Perry popped the question to Gilbert with a musical picnic in the park, which Sara described as "magical and amazing."

While the couple has been together since the fall of 2011, Gilbert was caught completely off guard.

"I'm sitting there listening and I'm kind of daydreaming and I'm thinking like, 'If I ever proposed to her this would be an amazing way to do it,'" Gilbert said.

"The people picnicking next to us pull out string instruments from under the blanket, walk over and they start playing 'Love Song.'"

Sara also noted that the popular Cure ballad is "their song" ... but the surprises didn't stop there, as Perry pulled out even more impressive moves!

Adding, "She goes to her backpack and she pulls out these T-shirts and the first T-Shirt says 'will' and then puts on another T-shirt and it says, 'you,' then 'marry,' 'me.' And the last one's a question mark. It's the most amazing proposal ever," she told the audience with tears in her eyes.

The 38-year-old decided to share the good news with their live audience because of all of the support she's gotten from her fans, explaining "I happened to be talking about gay marriage and I thank you all for your support on that issue. ... That was before I had any idea about any of this. I'm super shy and don't usually want to tell anything," she said. "But I wanted you guys to know because I feel like you're a part of our family here."

We couldn't be more thrilled for Sara and Linda -- congrats to the happy couple! Click "Launch Gallery" above to see more celebrity wedding & engagement bling.