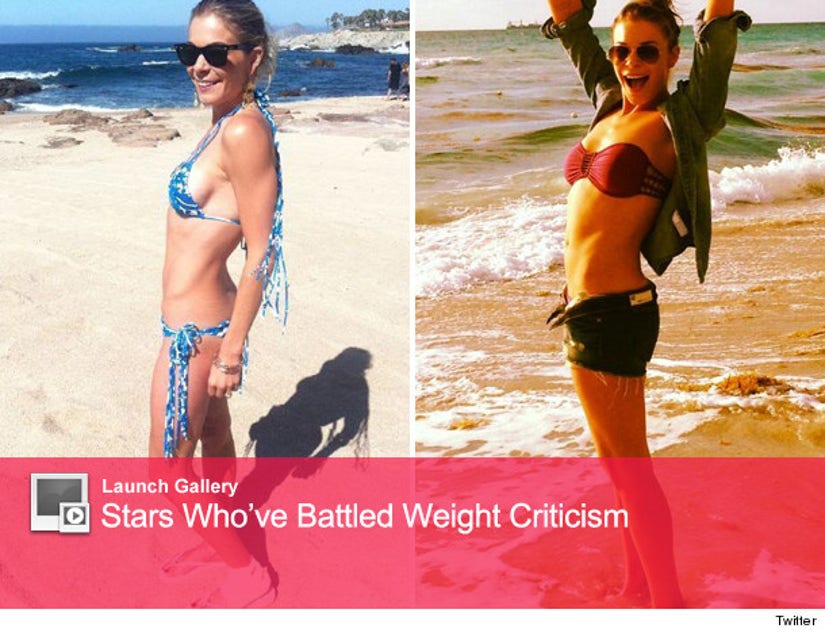 LeAnn Rimes says she's in a happy place ... with her body!

The Country singer recently chatted with MailOnline where she addresses anorexic rumors and her affair with Eddie Cibrian.

Rimes still insists that she was never anorexic -- in fact, she says she could out eat her buff beau!

LeAnn attributes her dramatic weight loss to her lack of sleep when the scandal with Eddie went public.

"But I didn't have a problem with eating as I ate a ton all the time – I could eat my husband under the table! But I was going through a time when I just wasn't sleeping – my mind wouldn't shut off and my heart was breaking," she says.

Today, the 30-year-old is finally comfortable in her skin ... she also gets extra encouragement from her hubby when she's feeling insecure.

"Now I'm secure about my body, although I'm like any other woman and have my moments of self doubt. But it's nice to have a husband who tells you you're beautiful all the time. I'll say to him: 'I've gained a few pounds' and he'll say: 'Good,'" she admits.

The "Can't Fight the Moonlight" singer says that because she's been a public figure since the tender age of 13, she's experienced first-hand how tough the entertainment industry can be on women -- noting that it's worse for female celebs.

LeAnn also talks about her relationship with her now-husband Eddie, and how she loves being a stepmother to his children with his ex, "Real Housewives of Beverly Hills" star Brandi Glanville.

Rimes hopes that she can continue to grow as a wife, mother and entertainer.

"I've made mistakes along the way, but I hope I've learned from them. I hope I never stop trying to figure it all out," she confesses.

What do you think of LeAnn's interview? Sound off below and see more stars who've battled weight criticism in the gallery above!