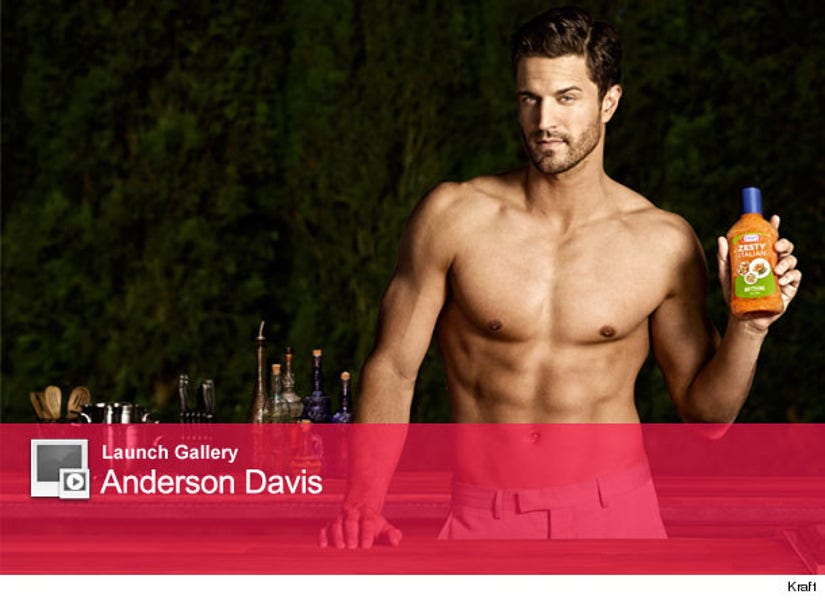 It seems like you can't turn on your TV (at least not Bravo, anyway) or go online without seeing Anderson Davis' face (and body).

The handsome star of Kraft's racy "Let's Get Zesty" campaign has become a viral video sensation. But who is the man beneath the perfect scruff and abs? toofab's Lawrence Yee caught up with Anderson, where he talked about the campaign that has made him an overnight sensation.

Here's five facts you need to know about Anderson:

Anderson claims that it's been three years since he's stepped inside a gym. Instead, he works out at home with two sets of dumbbells and a bench ala Rocky Balboa.

2. He can actually cook.

Anderson not only plays a sexy chef on TV, he's a decent cook in real life too. His specialty? Chicken enchiladas. But he also loves burgers: especially bleu cheese burgers. Of course, Anderson doesn't count calories like many other fitness models. Guess he's just genetically blessed!

However, he's not super flexible. As demonstrated in one of the spots, Anderson "absolutely does not" do the splits.

3. His family had mixed reactions to the ads.

"My mom got a kick out of them," Anderson said. "She thinks they're really funny."

However, one of his four sisters feels her exposed brother is overexposed. "I am so sick of those ads," she told him. "I can't go on the internet without seeing you!"

4. He almost ruined his perfect face

During the Kraft Zesty Italian shoot where he pours salad dressing into a frying pan, things got a little too hot! "The pyrotech almost got my eyebrows," he admitted.

5. He's flattered by fans of both sexes.

Even though he addresses the ladies in his commercials, he doesn't mind having male fans. "I don't mind," Anderson says. "If someone is attracted to someone it is what it is. I enjoy entertaining in any way."

As for his personal life, Anderson plays coy. "Lemme quote my favorite actor Paul Newman: 'Why go out for a hamburger when you have steak at home?'" Okay then!

Fans should keep an eye out for the final unaired spot, which Anderson says is his favorite. You can also catch the 6'1 stunner in a campaign for Sauza, where you can "Make It Easy" with his lifeguard character. And yes, he is shirtless.

Click on the "Launch Gallery" button above to see more shots of Anderson!