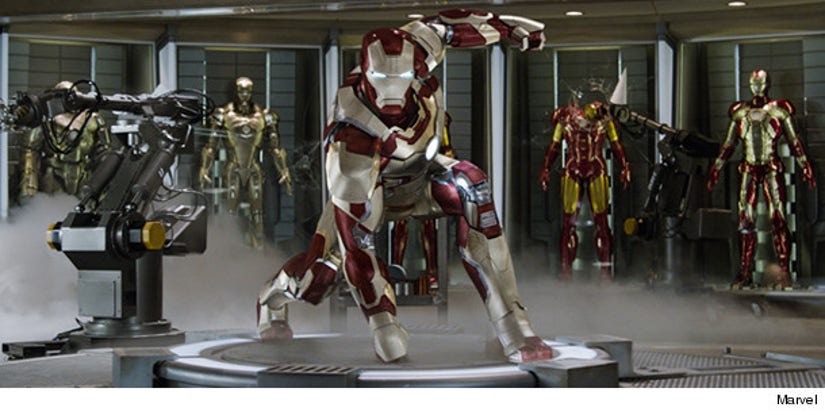 There's no doubt "Iron Man 3" will be a huge hit when it comes out next week -- but, in the aftermath of the Boston Bombings, some scenes may now be harder to watch.

At a press conference for the movie earlier today, Robert Downey Jr., Gwyneth Paltrow and Don Cheadle spoke out about some of the unfortunate real-life parallels the flick faces and how they've handled the topic of violence (both actual and celluloid) with their own children.

While our review of the movie is on hold until next week, there's one scene in "Iron Man 3" involving an explosion at the Chinese Theater in Hollywood that shares an eerie connection to what happened in Boston last week.

The fact that a terrorist (Sir Ben Kinglsey's menacing Mandarin) takes credit for the blast -- which claims lives of innocent civilians -- only makes the coincidence more unsettling.

"Clearly, this movie was in the can before anything happened," Cheadle explains. "As Robert mentioned earlier, the job of this film is to entertain. We're really trying to give people the ability to go into a darkened room and have a couple of hours of just pure enjoyment."

And while they do want to provide an escape for the audience, Paltrow says the movie can also help open up communication with your kids about some of life's scarier situations.

"We do live in an unsafe world. That's the truth," she says. "I'm dealing with that now with my seven-year-old [son Moses], who's grappling with the fact that the world is unsafe and there are people who do harmful things."

"I don't think there's anything wrong with presenting that idea," the mother-of-two continues. "We can't lie to our children and pretend the world is perfect and everybody's happy and out there to do good."

"I just know that after my children saw the movie I had certain conversations with my son about it and it's a good place to have a conversation," she says.

Downey kept it simple, saying "I like entertainers to talk about entertainment" -- but then teasing "There's something about it [The Mandarin backstory] that allows the air to be taken out of the darkness."

See if good prevails when "Iron Man 3" opens May 3.

And check out this brand new clip from the movie below: