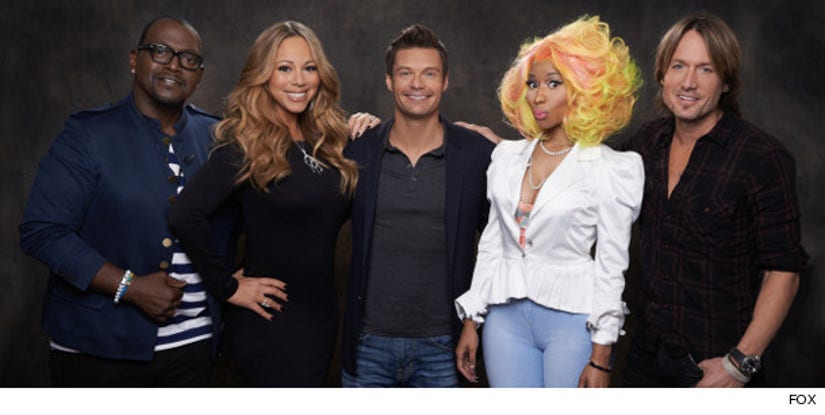 After 12 seasons, it's understandable that interest in "American Idol" is beginning to wane.

While it's not tanking as badly as say, "The X Factor," "Idol's" viewership is the lowest since Season 1, when American viewers were still learning what the show was all about.

This dip prompted "Idol" producers to reportedly reach out to former judge Jennifer Lopez to return, which a FOX spokesperson called "ridiculous." It's one thing if J.Lo returns as a performer, but if you think about it, having her join the judging panel one month before the finale *is* ridiculous. She's made no time or emotional investment in this season's contestants, and her opinions really wouldn't matter.

Ironically, in terms of talent, this is one of best seasons, with any of the remaining finalists -- Candice Glover, Angie Miller, Kree Harrison and Amber Holcomb -- making a deserving winner. So what's turning viewers off? Here are five theories.

1. The judges' chemistry -- or lack thereof

I've covered "Idol" for the better part of a decade, and was excited when I heard Keith Urban, Nicki Minaj and Mariah Carey were joining the panel. From a judging point of view, two of the three have delivered. Keith seems to genuinely care about the contestants, giving them honest feedback when needed. And despite Nicki's silly nicknames for the singers, she's brutally honest ... and usually spot on. Unfortunately, it seems to pain Mariah to give a bad critique, and she's been recycling her comments for weeks.

When critics say there's a "lack of chemistry," I wonder what they want to see. I'm glad that the days of Paula Abdul flirting with Simon Cowell and Simon making jabs at Ryan Seacrest's sexuality are behind us. The show should be about the singers, not the judges -- and at least the judges seem to know this. Aside from a few rolled eyes, Nicki and Mariah (who famous fought during the auditions) have been fairly cordial this season, hopefully out of respect for the contestants.

For a show that tried to go younger by hiring Nicki, the song choices are anything but. Were any of the second-round songs that the top 4 performed even from the last 30 years? "MacArthur Park"? "A Whiter Shade of Pale"? Many viewers' *parents* wouldn't even know these songs!

At least Candice tried to cover Drake and Angie sang Jessie J, but the second hour of Wednesday's show was a snoozefest.

Never underestimate the draw of an attractive young male. If there were a Justin Bieber-esque, white guy in the competition, tons of teen girls (and let's be honest, many women) would be tuning in. Any male contestants fitting this description were eliminated in Hollywood Week. Was that a conscious decision on the producers' part?

Lazaro Arbos shouldn't have made it out of Hollywood Week. The fact that he was the last male contestant standing (and was in the Top 3 one week) really hurt the show's credibility.

Over the last few weeks, the judges have been pimping out particular contestants, telling viewers to literally "vote for [insert name here]."

No one ever likes to be told who to vote for, as it defeats the democratic nature of the viewer vote. Sure, the judges can offer their opinions, but when the opinions are confusing or even just plain wrong, the show's credibility is eroded even further.

Take Amber, who's gone from middle-of-the-road finalist to the anointed one. She killed her first performance to Celine Dion, but her second one was, in short, a disco disaster. Compare below:

Randy Jackson heaped on the praise, comparing Amber to Rihanna (whom she has zero in common with either stylistically or artistically) for a second week in a row. Nicki jumped on the gushing bandwagon too (getting so excited she called Amber "Angie").

Candice and Kree, who have been frontrunners all season, seemed to receive overly harsh criticisms. Aside from ratings, "Idol" is about selling records, and the powers-that-be now seem to back the "marketable" (their words, not mine) Amber and Angie.

So what can be done? Nothing more this season, unless they add Justin Bieber as a wildcard contestant. And since the judges' save wasn't used, there's actually an extra week of the show -- and an extra week for the producers to watch the ratings drop.