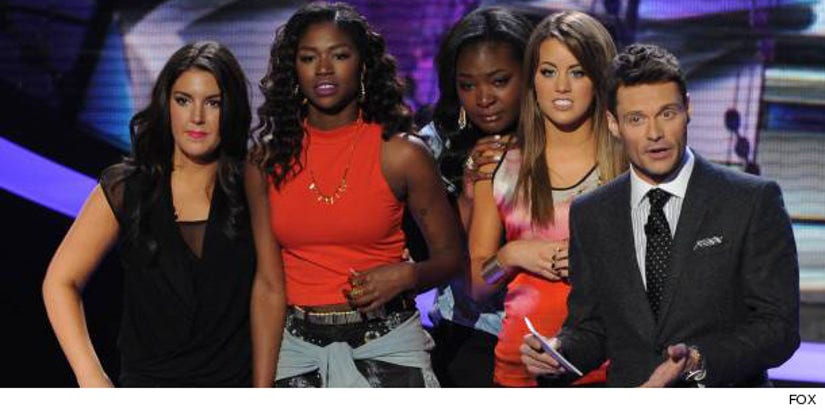 "In just a bit, I will announce some shocking news that will affect the judges and turn the competition upside down," Ryan Seacreast dramatically announced at the beginning of Wednesday's "American Idol" elimination show.

Well, in typical hyped "Idol" fashion, "just a bit" ended up being the entire show, and the "shocking news" was something I predicted: no one was sent home. Basically, "Idol" was running ahead of schedule because the judges didn't use their one save of the season, so there had to be a non-elimination week before the mid-May finale.

A true shocker would've been having Jennifer Lopez join the judging panel, which was reportedly being negotiated. But as I wrote yesterday, that would've been ridiculous at this point in the season.

Instead, viewers were treated to a nice but forgettable group number, even more forgettable performances by alumns Stefano Langone and Lee DeWyze (whose new single is a total Mumford & Sons rip-off), and a painfully awkward Ford commercial.

At the end of the show, it was revealed Angie Miller and Kree Harrison were in the top two, while Candice Glover and Amber Holcomb were in the bottom.

It's no surprise Angie was among the highest vote-getters; she "won" the night. Kree absorbed all of last week eliminee Janelle Arthur's country votes, so I expected her to be safe.

The judges' continual pimping of Amber backfired; viewers don't like to be told who to vote for. As for Candice, who has never been in the bottom group, that's just how the placements worked out.

So next week all four contestants will return, and the votes from this week's show will be added to next week's to determine who goes home. The theme is "Now and Then," but I think the "Idol" producers should take advantage of the extra show and really pull out all the stops. 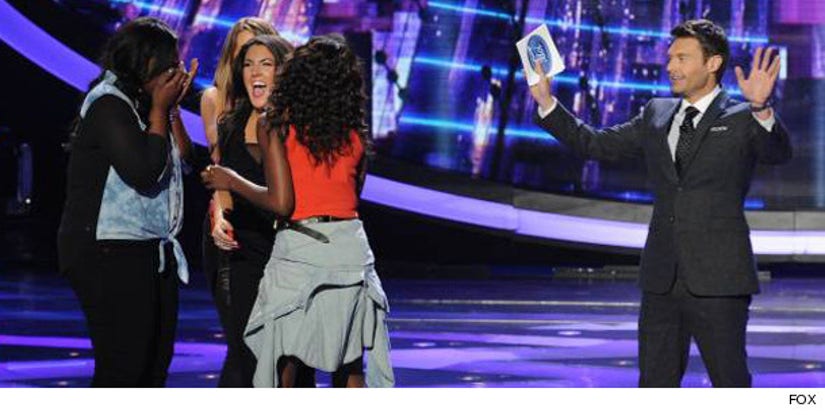 How about revealing the exact placements of each contestant -- something they did on "The X Factor" to encourage more voting? Or if they want true ratings gold, have the judges perform *with* the contestants: Kree could duet with Keith Urban, Amber with Mariah Carey, Candice and Nicki Minaj could do a cool R&B number and Angie Miller could hit the piano with Randy Jackson on bass.

Or have the judges perform together, ala "The Voice." Nicki Minaj and Mariah Carey sharing the stage ... now that's something everyone would watch!