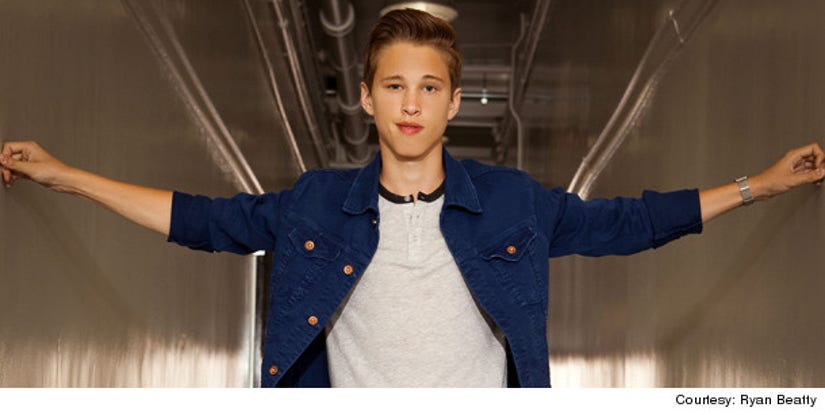 Ryan Beatty has performed in front of thousands and sang at venues ranging from The Roxy to Dodgers Stadium, but there's one thing the teen idol is nervous about -- his prom!

Adding to the 17-year-old's excitement? He doesn't know who his date is yet, but knows they'll have a memorable night.

Ryan teamed up with Clear Channel Radio and Olive Garden for a special contest. The winner won a prom date with Ryan, and 10 of her friends will join the duo for dinner at Olive Garden.

"I'm really excited to see who the winner is," Ryan told toofab's Lawrence Yee. "It's the first prom I've ever attended. It's my senior year also, so it's last chance to go to prom."

"I do miss going to football games and hanging with my friends on Friday night," Ryan admitted. "Prom is definitely one thing I always wanted to experience. I do miss being around all my friends at school, but don't regret any decision I've made. I love what I do -- I wouldn't trade anything for it."

So besides meeting his date, what else is Ryan nervous about?

"I'll be 100% honest with you. I'm probably one of the worst dancers. That's probably the part I'm most nervous about. I'm not too good at it. Even when I do live shows, dancing is not something I do. It's going to be fun though."

Even the process of asking a girl to dance can cause some anxiety. "Sometimes there are those moments when I'm a little nervous and the girl is like, 'Hey you wanna dance?' That makes things a little easier!" Ryan admits. Aww, even pop stars get nervous!

Along with senior prom, Ryan is going to experience another rite of passage: graduation.

"I take an online school and it's really hard. I'm almost done. I'm really excited to finally graduate. Eventually I want to go to college, but right now, once I graduate, I want to put all my energy and focus 100% on my career."

Ryan told us what his fans can expect from his upcoming EP, which doesn't have a release date yet. "I don't want to rush at all. I want to let the music choose itself for the album." As for the sound, Ryan says, "it's definitely more mature than the EP that I put out last year. The lyrics are a little more personal, the production has a little more electric guitar, some things I haven't done yet. Some of the music has an old school '70s vibe."

For more on Ryan and his music be sure to visit his official website.

And, be sure to check out Olive Garden's Picture-Perfect Prom Contest on Instagram. Fans can share prom-themed photos for a chance to win a weekly grand prize of a $500 prepaid credit card towards prom costs and prep for the big day (official rules here).