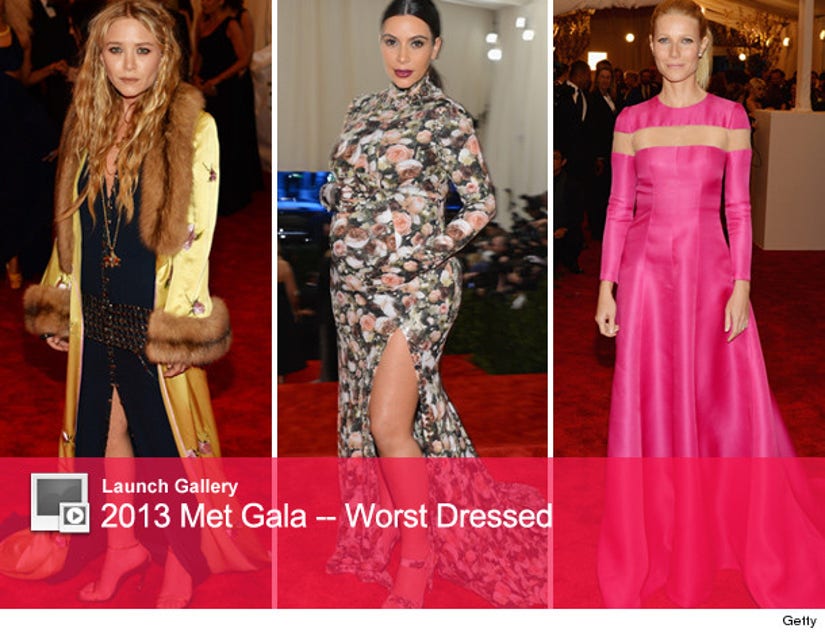 The 2013 "PUNK: Chaos to Couture" Met Gala went off with a bang last night -- with our favorite stars rocking some super hardcore garb!

While most of the celebs brought it, some missed the mark ... completely. Case in point: Mary-Kate Olsen, Kim Kardashian and Gwyneth Paltrow ... who clearly didn't get the "punk" costume memo.

Mary-Kate looked like her usual frumpy self -- really, did she even dress up? Swear we've seen her in this same outfit running errands on the streets of New York. The only thing she has going for her in this look is that it's vintage Chanel.

Kim Kardashian -- the self-proclaimed fashionista -- played it more than safe in this floral Givenchy gown. For one, the dress is not even flattering on a woman that heavily pregnant ... and it's way off point from last night's theme. Kim would have been better off going with her usual black and leopard couture.

And Gwyneth Paltrow played it all to safe in this hot pink Valentino gown. While the color could be considered "punk," unfortunately for her ... she looked more like prom princess than a punk rocker in this ensemble.

Click "Launch Gallery" above to see even more of the night's worst dressed stars like Katy Perry, Miley Cyrus and Beyonce!