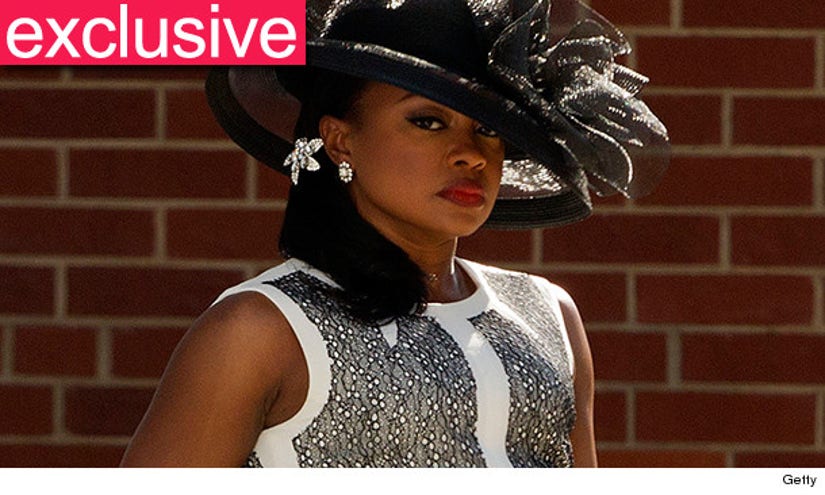 Phaedra Parks has been recovering from giving birth via C-section a month ago, but she's eager to talk babies ... and belles!

toofab's Lawrence Yee caught up with the lawyer-turned-reality TV star, who dished about her newborn son, upcoming book, and of course, "The Real Housewives of Atlanta."

As toofab exclusively reported, Phaedra gave birth on May 8th, more than two weeks before she was due. Her son -- whose name she and husband Apollo Nida discussed but have yet to release -- was delivered via Cesarian. Phaedra says the baby was supposed to be over 10 pounds, but came into the world around 7 pounds.

And although it's now been a month since the birth, Phaedra has only heard from a few of her fellow wives. "Kandi [Burruss] and Todd [Tucker, Kandi's fiance] came to the hospital. Cynthia [Bailey] has talked to me several times since giving birth. And Porsha [Stewart] sent a wonderful gift."

As for NeNe Leakes, "No, she hasn't reached out," Phaedra admitted. "But I did just receive an invitation to her wedding." When asked if she would attend, Phaedra answered, "Yes I plan to attend. I like NeNe but she doesn't always like me."

The new mom also hasn't heard from Kenya Moore, whom she feuded with all season and during the finale. "I only met her when she joined the show," Phaedra admitted. "We've known each other for a few months, and months does not make lifelong friends."

Perhaps the former Miss U.S.A. could use a few lessons from Phaedra's upcoming book, "Secrets Of The Southern Belle: How To Be Nice, Work Hard, Look Pretty, Have Fun, And Never Have An Off Moment" (working title).

"I wanna be optimistic and think that people might not know the rules and how to conduct themselves," Phaedra continued. "[The book] is a modern day twist on Emily Post. It's not about being from The South, it's about being a lady and acting appropriately."

She describes "Secrets Of The Southern Belle" as a how-to from "womb to tomb," covering everything from delivering a baby to adolescence to job interviews to funerals.

Phaedra admits that she hasn't always acted like a Southern belle, referencing the f-bomb she dropped on the show:

Hopefully, readers will learn how to act well with "Secrets of The Southern Belle," which will be out for the holidays.

Of course you can catch Phaedra on "The Real Housewives of Atlanta" (shooting on Season 6 begins in two weeks) and her spin-off "Rich People Problems."