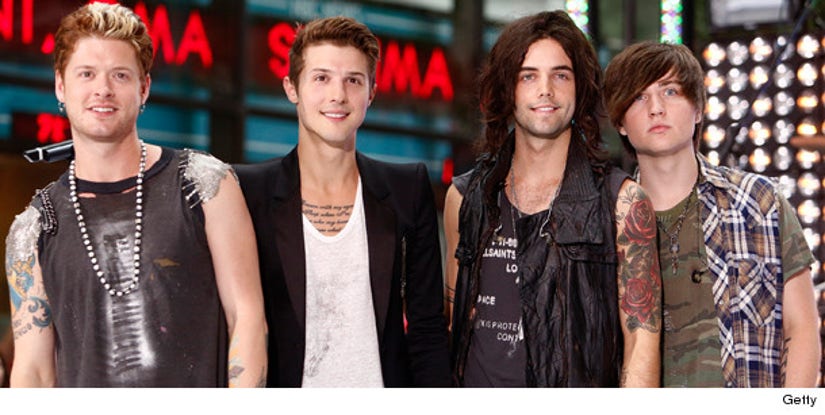 The guys of Hot Chelle Rae (from left to right) -- Nash Overstreet, Ryan Follese, Ian Keaggy, and Jamie Follese -- are living up to their name and heating things up this summer.

The pop-rock band is kicking off Pop-Tarts Crazy Good summer concert series with Owl City at The Tabernacle in Atlanta on Wednesday, and toofab caught up with the guys before the big date.

Find out the weirdest thing they've eaten in their international travels, how it was touring with Taylor Swift, and which of the guys is open to a summer fling!

toofab: How does it feel to kick off the Pop-Tarts Crazy Good Summer concert tour?

Ian: I'm stoked about it! Pop-Tarts know how to put on a good show so as long as I don't eat two boxes of S'mores before I go on stage I know it'll be rocking!

toofab: If you could be a Pop-Tarts flavor, what would you be?

toofab: What do you eat on the road (Pop-Tarts)? Any special cravings or requests?

Jamie: Many Pop-Tarts! Ian always has a craving for them so we are stocked. Besides that, basically anything that is detrimental to your body is what I like.

toofab: You've been all over the world. What's the weirdest thing you've eaten?

Jamie: By far kangaroo! But it was pretty good!

toofab: Who's the favorite act you've toured with? Who would be your dream act to perform/tour with?

Nash: I feel like I can speak for everyone by saying that our favorite tour to date, was the month we spent in Australia and New Zealand with Taylor Swift. Not only were the fans amazing, but the entire band/dancers/everyone became such good friends. We never stopped hanging out and exploring the cities we were in. Hopefully, we'll be able to do it again someday.

toofab: Any of you looking for summer flings?

Nash: As far as summer flings go, I'm *always* down for an adventure, and you never know when one may happen. I like to keep my mind open and love meeting new people. They may become your best friend. Or you may just make out on the beach and never see them again. Either way, it's all fun!

toofab: What's the weirdest thing a fan has ever given you?

Ryan: Not so much weird but awesome. A massive "Avatar" poster that's still in my room!

toofab: Any news on your third studio album?

Ryan: We have been working for a long time on it now! We've written over 20 songs and are very close to starting the process of narrowing down which ones we're sadly going to have to cut for the album.

Hot Chelle Rae aren't the only big acts performing on the Pop-Tarts Crazy Good summer concert series. In July, Demi Lovato and Chris Wallace will pop up in a surprise location, and Austin Mahone, Conor Maynard, Ryan Beatty and Bridgit Mendler will perform in a secret location in August.

Fans can go to the Pop-Tarts Facebook page to get the scoop on the last two cities in the series!