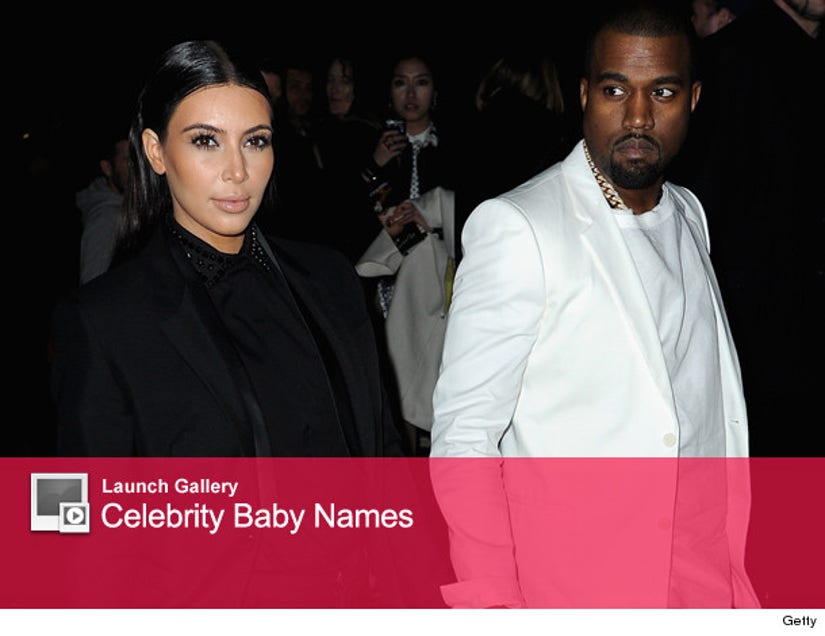 Yes, Kim Kardashian and Kanye West actually named their daughter North West, a moniker that officially enters them into the Wacky Name Hall of Fame.

The name North on its own is actually kinda cute, if you forget about the Elijah Wood movie of the same name from 1994.

By celebrity standards, it's almost normal!

Check out the gallery above to see more crazy baby names -- and see the most unique below:

Ashlee Simpson and Pete Wentz gave their son this crazy name, with "Mowgli" coming from the main character in Rudyard Kipling's classic "The Jungle Book."

It's a three-peat for Bruce Willis and Demi Moore, who gave all three of their daughters together some wacky names.

Holly Madison and Pasquale Rotella gave their newborn daughter a very rave and Disney-friendly name. Of the name, Holly says "Growing up, there was a girl in my school named Rainbow and I was so envious of that name." Aurora is clearly an homage to "Sleeping Beauty."

Celebrity chef Jamie Oliver and wife Jools Oliver gave all their kids some hippie names too. Holly Madison would be proud!

Toni Braxton and Keri Lewis definitely had some unique names in mind for their two sons. "It was supposed to be spelled D-e-n-h-a-m," Toni says of Denim -- adding that she changed it after a nurse kept mispronouncing it. Her other son is named after German engineer Rudolf Diesel.

Magician Penn Jillette loves his daughter's wild name. "I love the name Moxie, I love that it's a purely American word, and those are rare, and I love that it stands for old fashioned spunk and energy. [His wife] EZ pushed for her middle name, 'CrimeFighter' because EZ doesn't have a middle name and thinks middle names are stupid. So, it's just a joke."

Jason Lee and wife Beth Riesgraf got the name Pilot from a Grandaddy song. "They just liked the name Pilot, and I believe Inspektor came from a friend, Danny Masterson's younger brother," a rep also said when he was born.

"Knight's Tale" actress Shannyn Sossamon says she and Dallas Clayton chose the name because "We wanted a word not a name, so my boyfriend read through the dictionary three or four times."

Kevin Smith LOVES comics, so he named his daughter after the villainous girlfriend of The Joker from Batman. It's still kinda cool though, right?