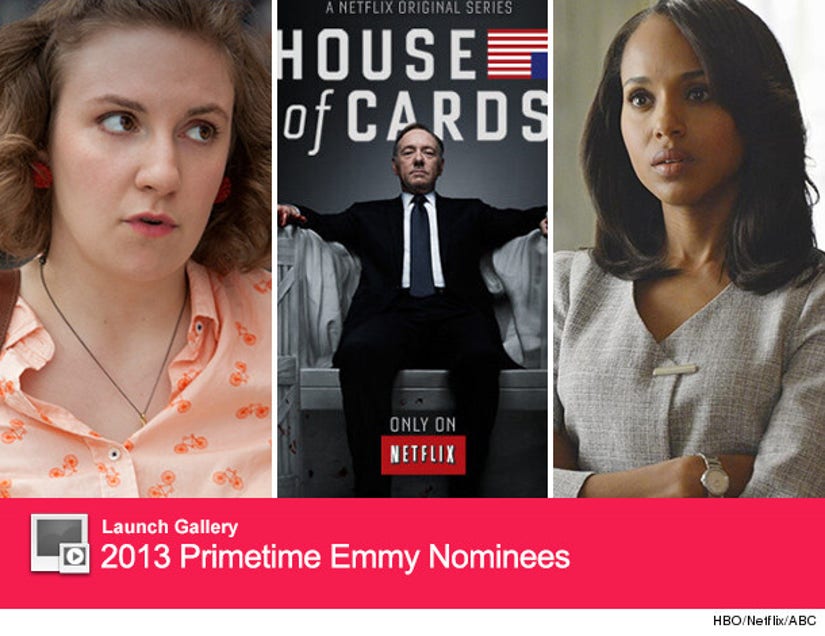 The nominations for the 65th Annual Primetime Emmy Awards were announced this morning, and there were some major surprises (see the full list of nominees here).

See the unexpected nominations we were pleased with, and the snubs that left us seething, below!

Emmy favorites "Breaking Bad," "Homeland" and "Mad Men" were well-represented. And of course, "30 Rock" was going to get honored in its final season.

In the lead acting categories, we're pleased to see Vera Farmiga get a nod for her nuanced performance in "Bates Motel." Vera tells toofab exclusively, "It is such an honor to be recognized by the Academy and in the company of such brilliant women. I'm grateful to Carlton, Kerry and Anthony for gifting me with the opportunity to play such a complex woman and for breathing new life into the iconic Norma Bates."

Kerry Washington has been red hot, and it's no "Scandal" she got nominated. She's only the fifth African American actress to be nominated in the category.

Count us surprised to see Emilia Clarke from "Game of Thrones" get a Supporting Actress nod, over Emmy darling Archie Panjabi from "The Good Wife." "Game of Thrones" is a ratings hit the Academy can't overlook.

We're very surprised to see Jane Lynch get nominated for "Glee." She only appeared in a handful of episodes last season, and the show's ratings have been in decline.

And finally, Tim Gunn finally made it work! He's nominated alongside Heidi Klum for "Project Runway."

After being nominated four years in a row, "Dexter" was passed over for Outstanding Drama. Star Michael C. Hall, who was nominated five times in a row, was also overlooked. Ditto with "Boardwalk Empire" and its lead Steve Buscemi. The digitally distributed "House of Cards" likely stole a spot from these traditional cable dramas.

The Academy was not good to "The Good Wife" -- as mentioned before, former winner Archie Panjabi was snubbed. Julianna Margulies, who has been nominated the last three years for the titular role, missed out this year.

In the comedy category, "Parks and Recreation" definitely deserved a nod.

Ty Burrell, Jesse Tyler Ferguson and Ed O'Neill all got nominated for "Modern Family," but not two-time Emmy winner Eric Stonestreet. Definitely sucks to be the odd man out.

Critics have said "The Amazing Race" has become too predictable, and while the show got a nomination, host Phil Keoghan did not.

Despite all the attention on "House of Cards," supporting actor Corey Stoll -- who played the drug addicted Congressman Peter Russo -- was left out of the spotlight.

Also, it's pretty unforgivable Shirley MacLaine didn't get a nod as the outspoken Martha Levinson in "Downton Abbey."

Who do you think deserved to be nominated? Tell toofab in the comments below, and click "Launch Gallery" above to see all the nominees!