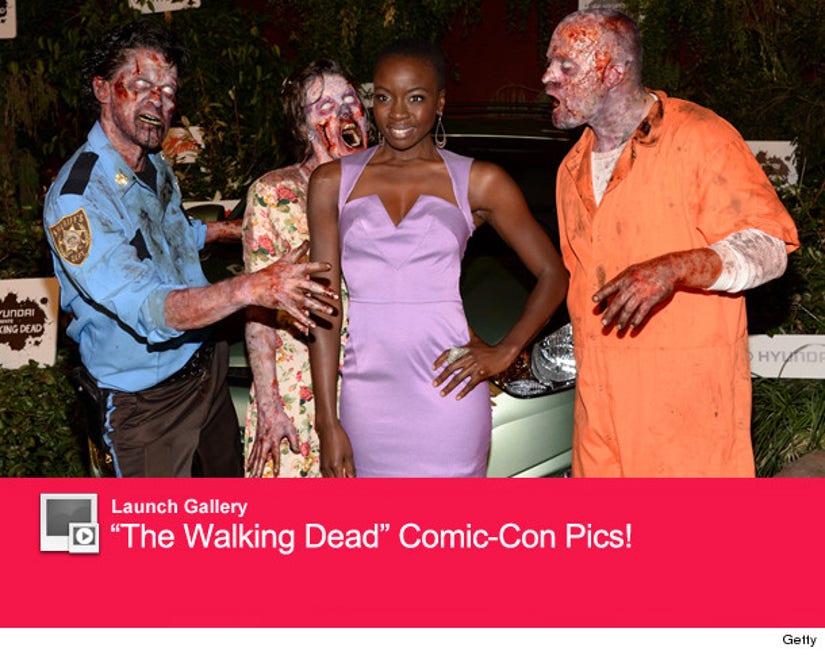 "The Walking Dead" is coming back to Season 4 in October -- and nobody is safe.

toofab's Brian Particelli caught up with the stars of the show at Hyundai and Skybound's 10th anniversary party for the comic books at Comic-Con this weekend, where they gave us some insight on what to expect when the show returns to TV.

Danai Gurira, who plays the silent but deadly Michonne, looked completely different without a layer of dirt and her character's trademark dreadlocks. Check out the video below to see what she says about getting to "glam it up" ... and how fans think it's time for her "get some."

During the Hall H panel, it was actually suggested that Michonne hook up with Rick (Andrew Lincoln) -- and that's a suggestion producer David Alpert was definitely hearing.

"I don't think anyone was taking it seriously until today, but there's a lot of support. It's interesting," he tells toofab.

He also adds that nobody is safe on the show, not even fan favorite Daryl Dixon (Norman Reedus).

"Everybody's on the table on every episode," he warns. "I saw the shirts today saying 'If Daryl dies, we riot.' That's not gonna stop us. Don't challenge us!"

And then there's The Governor (David Morrissey). At the end of the last season, he killed off most of his followers and went off to places unknown. But don't worry, we haven't seen the last of him.

Check out the video above to see what the villain will be dealing with this season and find out about a "new threat" that everyone will up against this time around.

Could we see Rick team up with The Governor to take down an even bigger fish? We'll find out when Season Four premieres October 13.

And click here to watch the exciting Season 4 trailer!