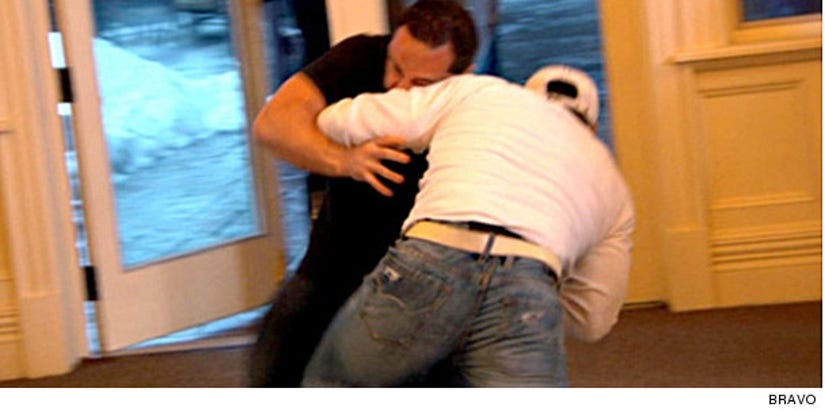 Last week, viewers got a sneak peek at the brawl between Teresa Giudice's husband, Joe Giudice, and her brother, Joe Gorga.

In typical "Real Housewives of New Jersey" fashion, the episode ended in a cliffhanger. Last night, the full fight aired, and it was a lot more violent that we thought. Check it out below:

Joe Gorga charged Joe Giudice. Melissa Gorga was thrown against the window and Teresa ignored her plea to pull the two men apart, instead running off to find security.

Kathy Wakile, her husband Richard Wakile and her sister Rosie Pierri jumped in to help, and eventually ended the fight, with Rosie getting knocked down. Melissa then screamed at her sister-in-law, but Teresa wouldn't hear it and left with her husband.

All the parties involved headed to separate rooms. Both Teresa and Joe Giudice cried over how bad things have become with their family. Joe Gorga continued to lament all night while Joe Giudice and Teresa hooked up after soaking in the jacuzzi.

The next day, psychologist Dr. V (from Bravo's "L.A. Shrinks") visited the families (her trip was already planned before the brawl) and brother and sister seemed to be open to reconciling.

Do you think there's hope for the Giudices and Gorgas? Tell toofab in the comments below!