After Joe Giudice demanded Joe Gorga apologize for calling his wife "scum," things got physical between the hot-headed Joes. Relive the fight below:

It's not the first time fights have gotten physical on Bravo's popular franchise. Here are our picks for the Top 5 "Real Housewives" fights that have escalated to violence:

5. Sheree Whitfield vs. Kim Zolciak ("The Real Housewives of Atlanta")

Sheree and Kim takes things outside after a heated fight. Sheree "shifts" Kim's infamous wig, which doesn't sit well with her at all:

Our second hair-pulling incident comes courtesy of the ladies of Franklin Lakes. Danielle Staub made enemies out of all the housewives, but it was Jacqueline Laurita's daughter Ashley Holmes that snapped (click on the photo for the video): 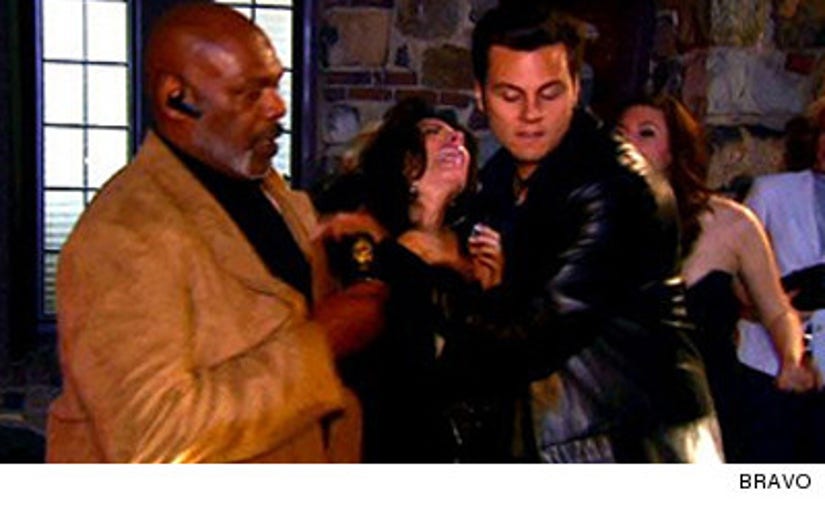 Tamra is known for being hot-headed and she was "disgusted" by the rumors her former friend was spreading in the media.

Tamra tossed her wine at Jeana, who in turn threw her drink at a Tamra lookalike Mishel (we don't blame her for mixing up the blondes -- and she was blinded by booze). That's when push came to shove:

"I'm a model, but not always a model citizen," Joanna Krupa declares in the "Miami" intro. Her words couldn't ring truer. At Lisa Hochstein's lingerie fundraiser, Joanna confronts foe-star Adriana De Moura. When Adriana tries to walk away, Joanna chases after her ... and gets slapped:

At the christening party for Joe and Melissa Gorga's son, things got out of hand. This was especially scary because there were young children and elderly adults present and someone really could've gotten hurt:

Which fight was the most memorable? Did we miss any? Porsha Stewart vs. Kenya Moore and Brandi Glanville vs. Kim and Kyle Richards never actually got physical, thankfully. Tell toofab in the comments below!