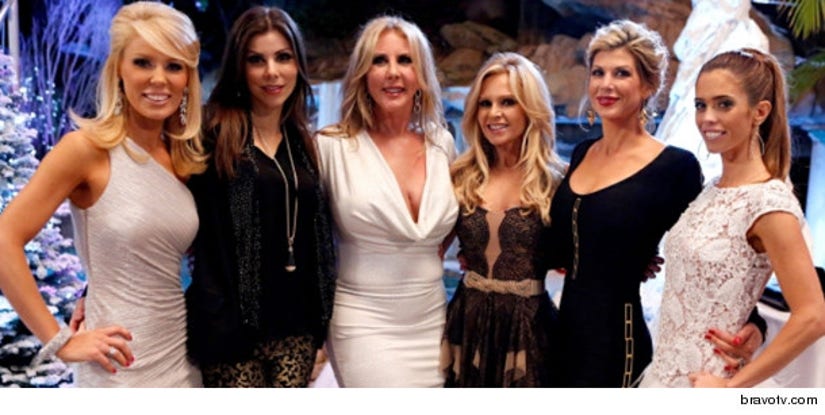 It all hit the fan on the "Real Housewives of Orange County" finale!

On Monday night's episode, Vicki Gunvalson's winter wonderland party looked more like a battlefield by the end of the night, with fights breaking out left and right.

Lydia McLaughlin and Vicki confronted Slade Smiley about his "evil" behavior (like making fun of the ladies' looks) -- and Vicki's son-in-law Ryan Culberson went off on Lydia's 64-year-old mother Judy for basically no reason.

Check out the clip below to see Vicki call out Slade for calling her "Miss Piggy" and "Tupperware face," and Lydia confront Smiley for making jokes about her weight!

We're sure it felt good for the women to finally share some choice words with Gretchen Rossi's fiance -- it's been a long time coming, to say the least.

But their argument was in no way the biggest shocker of the night. In a turn of events, Vicki's son-in-law Ryan showed a side of him that we've never seen before, maliciously attacking Lydia's mother for putting her feet on the couch.

Ryan's in the military, and had been under some stress about his upcoming tour in Afghanistan (which he's currently serving). Perhaps that, with the combination of alcohol, caused him to explode.

With all of the crazy fights and conflicts on last night's finale, we can't wait to see how the reunion goes down -- it already looks pretty intense in the preview:

Make sure to check out the O.C. reunion special which will be airing in three parts on August 12, August 19 and August 26.

What did you think of Ryan's behavior? Tell toofab in the comment section below!