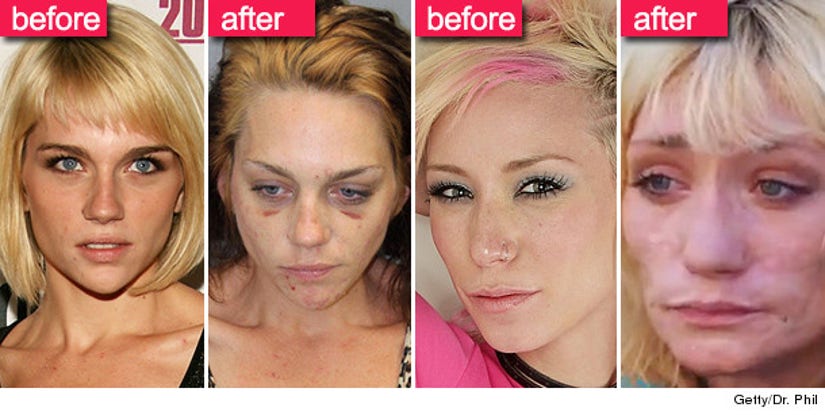 "America's Next Top Model" contestants past and present attended the show's Cycle 20 Gala Wednesday night, but two popular contestants weren't a part of the celebration.

Renee Alway and Jael Strauss, both from Cycle 8, made headlines after leaving the show for their shocking transformations.

Renee (top left), was arrested in June on suspicion of burglary, fraud, possession of narcotics, forged bills, and committing a felony while on bail. Jael's (above right) looks and life were destroyed by meth addiction, forcing Dr. Phil to stage a dramatic intervention.

toofab's Lawrence Yee caught up with longtime "ANTM" executive producer Ken Mok, who was saddened to see how far the models have fallen. "Your heart goes out to them," Ken told toofab exclusively. See what else he said about casting girls from troubled backgrounds:

Jaslene Gonzalez, the winner of Renee and Jael's season, was also at the event. "It blew me away. I felt bad," she said of her competitors. Listen to the kind things Jaslene said about Renee and Jael:

See more photos from the "America's Next Top Model" Cycle 20 Gala by clicking the "Launch Gallery" below: