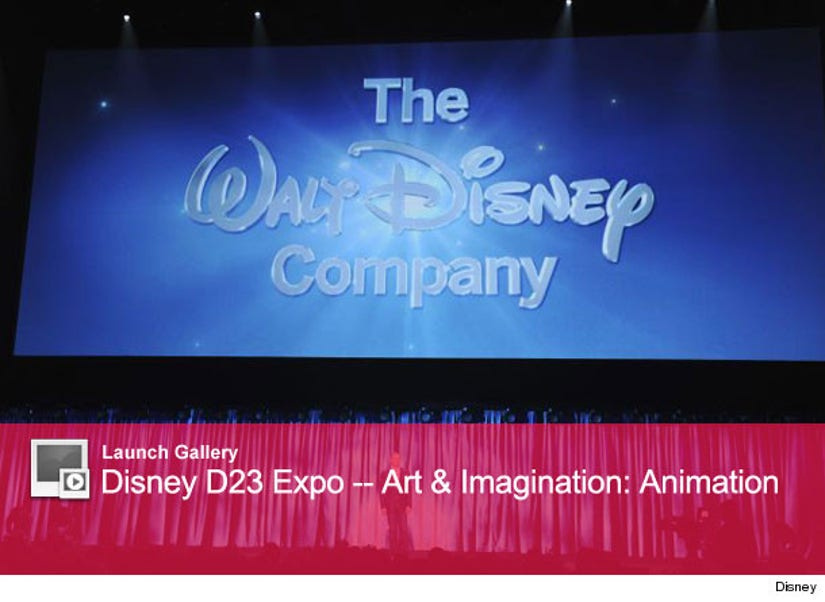 The Disney 2013 D23 Expo kicked off with a bang!
On Friday, the "Art and Imagination: Animation" panel provided Disney fans with exclusives from Pixar and the Walt Disney Studios 2014-2016 upcoming releases.

The panel opened with Disney exec Bob Iger who introduced teasers from some of Disney's most anticipated flicks.

We got our first look at Angelina Jolie in "Maleficent" (2014) and a very, very brief sneak peek at "Star Wars: Episode VII" (2015) -- while we didn't get any new info on either ... from what we saw, both movies (so far) look absolutely amazing!

Iger introduced guests to Disney and Pixar Chief Creative Officer, John Lasseter, who lead the remainder of the animation panel, and he shared even more amazing exclusives of what's to come -- check out all of Disney/Pixar's latest animation flicks below:

"The Good Dinosaur": The movie, slated for 2014, will show Disney's biggest "what if ever," as Lasseter described it -- namely, what if that infamous meteor missed earth, and Dinosaur's continued to live well into the future, evolving into farmers (functioning as their own equipment) and among humans!

While it won't portray how the two groups of species will coexist, the story will build on one intelligent youngster Arlo (Lucas Neff) and a little boy Spot.

The film will focus on a family Diplodocus dinosaurs with John Lithgow, Bill Hader, Neil Patrick Harris and Neff voicing the group. "The Good Dinosaur" will hit theaters May 30, 2014.

"Inside Out": Was the next Disney/Pixar flick introduced at D23 -- and this one looks awesome! The film will take place inside a young girls mind -- and the characters are made up of her different emotions. Amy Poehler will play Joy, Mindy Kaling's Disgust, Bill Hader is Fear and Phyllis Smith will play Sadness.

Phyllis and Hader surprised fans at the expo -- and gave the audience a taste of their characters in the flick. Side Note: Phyllis looks amazing -- she's definitely shed some serious pounds since she stopped working in "The Office"! The movie will hit theaters June 19, 2013.

"Finding Dory": While Disney has been keeping quiet on the "Finding Nemo" sequel's plot -- we learned what will happen in the very anticipated 10 year follow-up! While we were initially worried that there wouldn't be enough of Ellen DeGeneres' character, Dory, based on the title alone -- worry no more!

The movie takes place one year from when the first ended, and will focus of Dory's short term memory problems. After an (unknown) traumatic event happens to Dory, she begins to hone in on her instincts to find where she came from -- which leads her to search for her biological family.

Albert Brooks is back as Marlin, Ellen as "Dory," and Diane Keaton will play Dory's mother! "Finding Nory" will hit theaters in 2015.

Overall, it looks like some great things are in store for the Disney/Pixar slate -- and we can't wait to see these movies come to life!

Which movie are you most excited to see? Tell toofab in the comment section below!