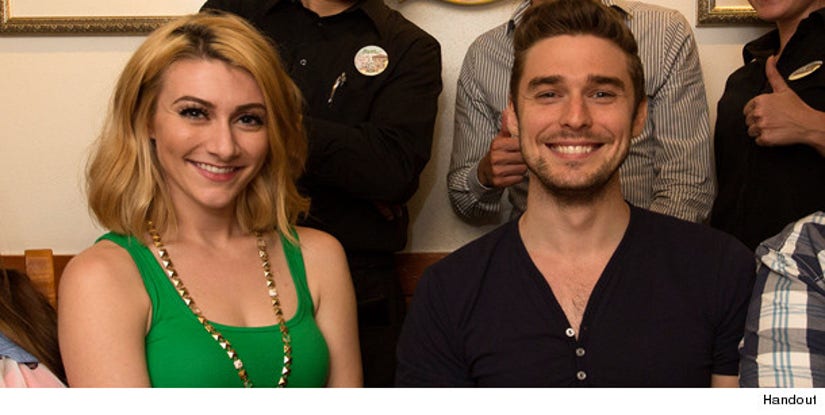 Pop sensation Karmin are known for their fun lyrics.

In their hit "Acapella" they even name drop Olive Garden!

Out on our first date, he took me gourmet
We hit that Olive Garden, my Little Italy

Karmin teamed up with the popular Italian restaurant chain to give two superfans, Christie and Maggie, dinner with Karmin, a $50 gift card to Olive Garden, and two tickets to see their final show in their tour with the Jonas Brothers.

It was a night neither Karim (aka Nick Noonin and Amy Heidermann) nor Christie and Maggie would forget. Here's what the band had to say about their fans:

Nick: "They were the reason why we were able to have any success in the first place. We uploaded that video, "Look at Me Now" and spent zero marketing dollars -- so it was all peer to peer, it was all fan to fan -- so they were all spreading it. So that was our start, it was not label made -- they were it for us."

Amy: "Yeah, they voted us on the cover of Rolling Stone last year and we were up against some incredible artists, so we were pretty sure we weren't going to win. So the fans - - they are so dedicated and since they are such a big part of our success, I feel like when we are winning, they are winning."

During the dinner, Karmin rocked monochromatic outfits with bold accessories -- similar to what they wore in the "Acapella" video. Both Amy and Nick were incredibly down to earth -- they casually talked with their fans and they even told us a funny story about how they and the Jonas Brothers pranked each other while on tour!

While Amy and Nick were performing their cover of "Look at Me Now," the JoBros covered the stage in toilet paper, put baby powder on the drums, and had "Sexy Sax Man" play "Careless Whisper" on stage while humping Amy!

Karmin's next album, "Pulses," is expected to be released at the end of September -- so be sure to check it out! In the meantime, check out their “Acapella” music video above. Another great song from their EP is "Coming up Strong," which the band really wanted to push as a single and is worth checking out.