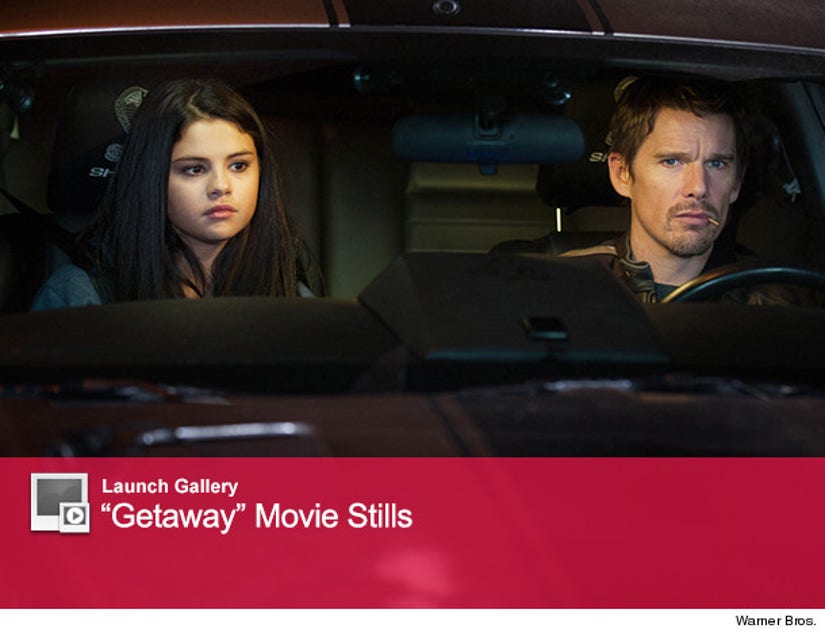 Selena Gomez's​ foray into more mature film roles had promise with "Spring Breakers" earlier this year, where she somewhat convincingly played a co-ed who turns to a life of crime.

Her latest film, the car chase flick "Getaway," is completely the wrong vehicle (pun intended) for the former child actress.

In the film, Gomez plays "The Kid," a car- and tech-savvy girl whose Shelby Mustang Super Snake is stolen by Brent Magna (Ethan Hawke). Magna is a race-car driver who must complete a set of tasks ordered by "The Voice" (Jon Voight), or else his kidnapped wife dies.

"The Kid" becomes Magna's unwilling passenger and accomplice, but it's the audience who will want bail from their seats and well, get away. As quickly as possible.

Nothing about "Getaway" makes sense, from it's Bulgarian setting to why "The Voice" -- who communicates via the car's hands-free phone -- even puts Magna and "The Kid" through these tasks.

"The Voice" has incredible technology (he's armored the Shelby and equipped it with interior and exterior cameras) and manpower (he commands an army of mobsters) at his disposal, but gets a washed-up driver and child (Gomez looks about 13-years-old in the film) to do his bidding.

The filmmakers try to make Gomez more adult by having every other word coming out of her mouth a profanity. But she never changes from the petulant teen over the course of the mercifully short 90-minute film -- in which she and Hawke spend 10 minutes telling each other to "shut up." Even the Shelby shows more range than she does.

Car chases are abundant, but poorly filmed. The action is jerky and at times hard to follow, but always ends with a jump cut where a Bulgarian police car meets its demise. There's also several scenes where Magna is forced to drive through crowds of people, which was disturbing for this L.A.-based reviewer after the recent Venice Beach rampage. And for some odd reason, the perspective goes from third person to first person in the final climatic chase.

But it's the plot that has the most problems. All of the devices to propel the story forward are unbelievable. If there's a problem, "The Kid" and her trusty iPad can fix them. Seriously, the education system in Bulgaria must be amazing if she's a whiz at cars, cameras, computers, and as the audience will discover, international banking.

The only thing worth watching -- some pretty crazy car crashes.

For even more "Getaway" reviews, head over to RottenTomatoes.com.