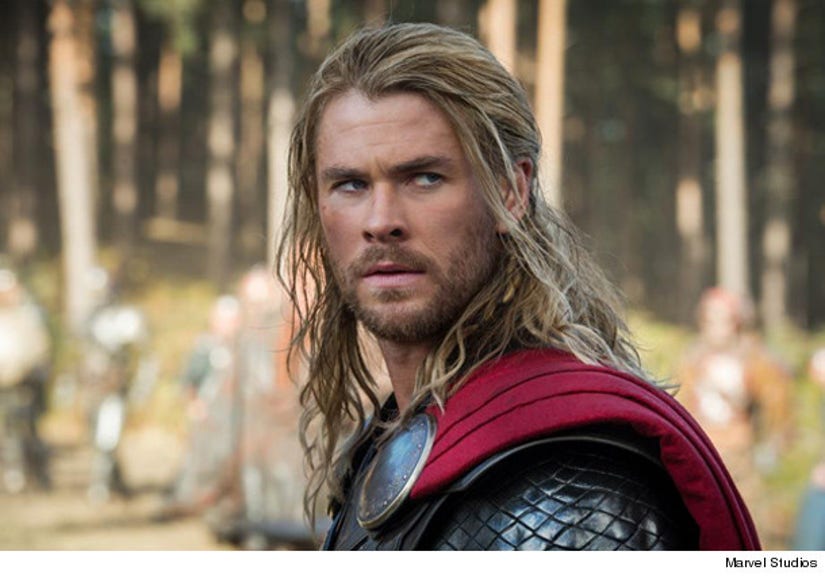 We're guessing a lot of you have some questions about that "Thor: The Dark World" mid-credits scene. Well, we've got answers!

After our hunky god saved the Nine Realms from destruction, Lady Sif and Volstaag are seen bringing the Aether to Benicio Del Toro to hold for safe keeping. They explain that they already have the Tesseract stored Odin's vault -- and it wouldn't be wise to keep two Infinity Stones in one place.

As Thor's sidekicks leave, Del Toro's character is heard saying "One down, five to go."

As we previously reported, Benicio will play The Collector in the "Guardians of the Galaxy" movie -- so this is the first connection between the existing Marvel universe and the upcoming flick.

This is also the first time we've heard the term "Infinity Stones," which plays heavily into the comic mythology for Thanos, the big purple guy teased at the end of "The Avengers."

Long story short, Thanos collects all six gems -- which have immeasurable power -- places them into the Infinity Gauntlet and becomes a threat unlike any we've seen so far.

Since Ultron has already been announced as the villain for the second Avengers movie, could the Marvel masterminds slowly be building up Thanos as the Big Bad in Part 3? We think so.

One thing's for sure: You can expect to see a lot more of The Collector when "Guardians of the Galaxy" hits theaters July 2014.

We talked to that film's director, James Gunn, at the premiere of "Thor: The Dark World," where he gave us some more insight into Benicio's character.

"Benicio's character is as wacked out as we see at the end of this movie, he's an outer space Liberace, so he's a crazy guy, he's great. He's an amazing actor to work with," teased Gunn.

We can't wait to see more of this wild "Guardians" world -- see what else we learned about the film at Comic-Con by clicking here.