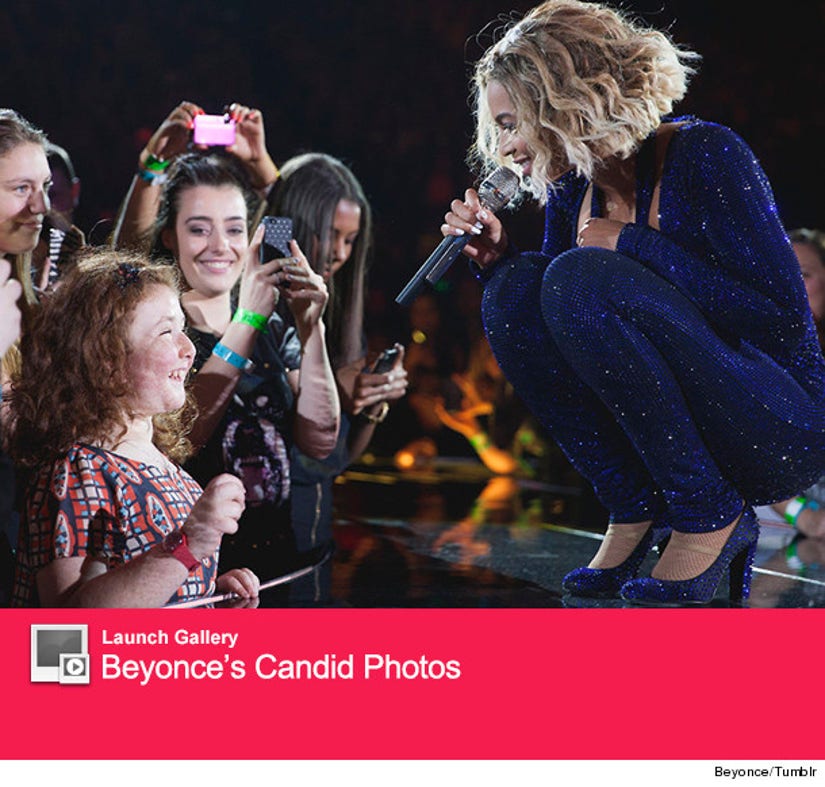 Beyonce made an "Irreplaceable" memory for one lucky fan!

During a concert in Perth, Australia on Friday, Bey sang a special duet with Sophie Kotkis, a 13-year-old super fan who's legally blind and suffers from mild cerebral palsy.

The singer found the special teen in the crowd, kissed her on the cheek and told the audience, "I have a very special young girl here -- tell everybody your name, beautiful."

"Sophie!" she replied, with a huge smile.

Beyonce then dedicated her hit song, "Irreplaceable," to Sophie before asking her help to sing the song.

Check out the cute moment below!

The 32-year-old seemed to be just as excited about her duet. She posted a flurry of photos on her Tumblr page of her song with Sophie.

So, how did Sophie's dream of meeting Beyonce come to light?

The special moment was arranged seven months earlier by Sophie's older sister Ellie. She made a video about Sophie, which was sent to Bey's camp by the children's charity, Hope For Children.

"She's never really been able to go to a concert due to logistical reasons, so I made a video about Sophie," Ellie told Perth News. "Even with everything that she's been through, she's been able to do so much. She raised over $1000 for people with multiple sclerosis at the Runamuck (for the MS Society). I put that all in the video and I just said that I think someone as amazing as Sophie deserves to meet someone as amazing as you (Beyonce)."

"She had no idea that she was going to sing with her," Ellie added. "It was amazing. Beyonce is her favorite. When "Single Ladies" came on, she jumped up and was dancing and everyone was watching her dance. She's still on cloud nine today."

What a special moment!

What do you think of Beyonce's duet? Sound of below and click "Launch Gallery" above to see more of Beyonce's candid photos!