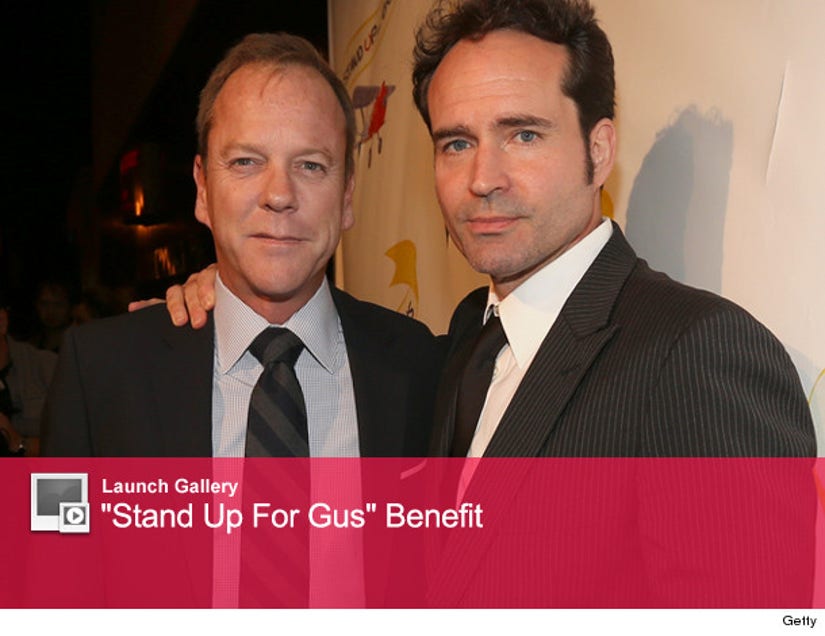 It's been over 25 years since Kiefer Sutherland and Jason Patric starred in the classic '80s horror flick "The Lost Boys" -- but the two stars haven't lost touch with one another!

toofab's Brittany Kyles chatted with Kiefer, who stopped by Bootsy Bellows on Thursday in West Hollywood to show some support for his former costar at his benefit "Stand Up For Gus."

The star studded night of stand up comedy was founded by Patric to raise awareness about parental alienation.

Check out the video below to see what Keifer had to say about his former "Lost Boys" costar!

It's great to see that there's no love lost between Sutherland and Patric -- the two are clearly still dear friends.

Just four years ago, Jason and his then-girlfriend, Danielle Schreiber, conceived a baby boy named Gus via in vitro fertilization. Jason was a staple in his son's life for three year, but after a fall out with Gus' mother, the actor was stripped of his rights due to an outdated statute meant for sperm donors. The statute was applied to Patric because the couple were unmarried and used IVF to conceive.

Check out the video below to see if there's been any progress in Jason's situation, and see what advice he has for those battling parental alienation:

We wish Jason the best in his fight for Gus, and we're sure last night's event helped to raise a ton of money and awareness about the cause.