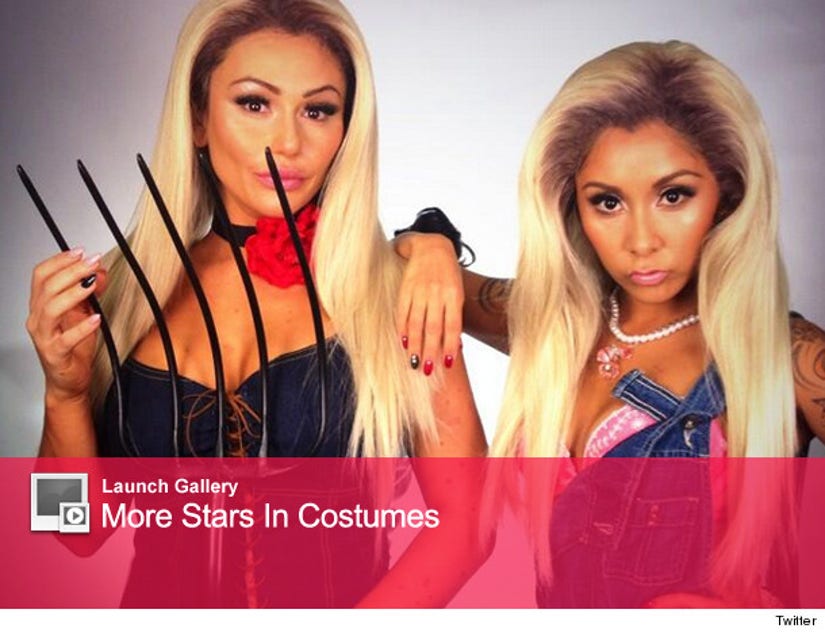 The reality stars just chatted with Buzzfeed, where they open up about Snooki's son Lorenzo, staying in touch with their "Jersey Shore" costars and channel some famous TV pals.

Snooki tweeted the picture of the ladies in their "Simple Life" gear -- and we gotta say, we love seeing the best friends sporting overalls and blonde wigs!

The mother-of-one posted, "Loving this article! I look like nicki Minaj...." along with the funny pic.

Now that Snooki's little guy is getting bigger, he can not only talk now ... but he likes to mess with his famous mom.

"He's good. He's great. He's crazy. He likes to hit. This is all from him [shows scratch marks]. He just likes to beat me up," the 25-year-old tells Buzzfeed.

Lorenzo also doesn't like the word "No." "He knows when he's doing something wrong and he keeps doing it. He's a boy," she says.

The ladies have also stayed pretty close with their former MTV costars, and Snooki has had both Sammy Giancola and Ronnie Magro babysit little Lorenzo.

It's crazy how far the ladies have come from their "Jersey Shore" days!

Make sure to check out Buzzfeed to see the rest of the MTV stars' hilarious TV getups, and click "Launch Gallery" above to check out more celebs in crazy costumes!