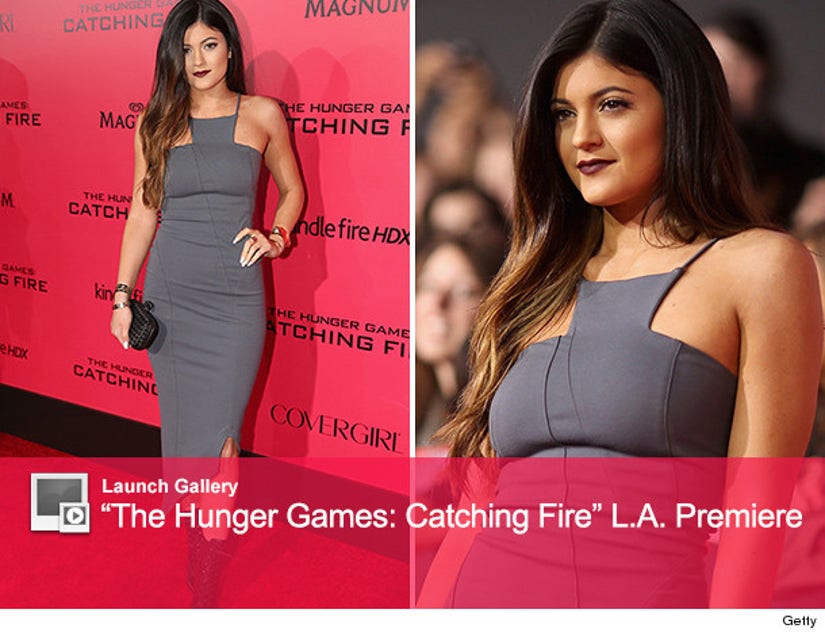 Jennifer Lawrence might be the star of "The Hunger Games: Catching Fire," but Kylie Jenner gave Katniss a run for her money on the red carpet Monday night at the premiere!

The reality starlet donned a figure-hugging gray dress, black ankle boots and a bold bordeaux lip. The 16-year-old seems to be following in the footsteps of sisters Kim and Khloe, rocking honey-blonde highlights in her hair. She kept her locks down with tousled beach waves.

Khloe Kardashian recently admitted that her younger half-sisters are fast becoming the most stylish members of the family!

Speaking at the at the launch party for the Kardashian Kollection for Lipsy at London's Natural History Museum this week, Khloe told BANG Showbiz: '"I do give Kendall and Kylie advice, but they really give me style tips too now, they're so chic and trendy. I take bits and pieces form everyone and make it my own and so do they. But we definitely share tips.''

Kylie certainly wowed on the red carpet, so was rumored boyfriend Jaden Smith on her arm?

The "After Earth" actor made an appearance with sister Willow Smith, but the cute couple didn't take any pictures together.

What do you think of Kylie's red carpet look? Tell toofab in the comment section below, and click “Launch Gallery” above to see all the stars from “The Hunger Games: Catching Fire” premiere.