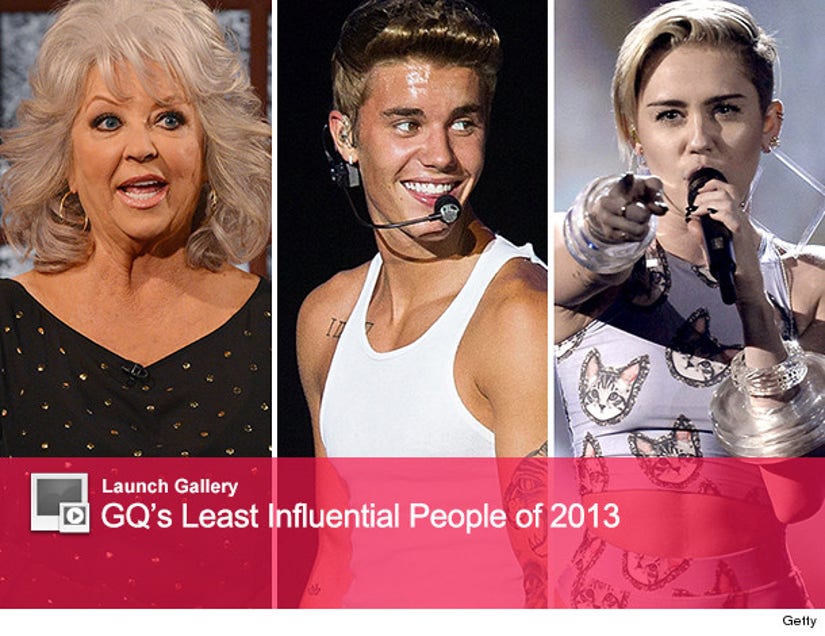 Justin Bieber and Miley Cyrus are getting no love from the folks over at GQ!

The pop stars round out the top 10 of the magazines "Least Influential People" of the year feature ... and, in all honesty, we share some of their sentiments.

"When you're a just-legal megastar raising hell and being a brat, people will still give you a chance," GQ's Drew Magary writes about the Biebs. "They'll blame the money and the fame and probably your parents. But once you lose the baby fat, there are no viable excuses. You are officially just a little s**t for p**sing in buckets and cursing out Bill Clinton and writing the exact wrong thing in the guest book at the Anne Frank house and spitting on people and having your monkey confiscated. Also, he dresses like a blind magician."

But Just and Cyrus aren't the only stars on the unflattering list -- Paula Deen, Lady Gaga, President Obama, Tim Tebow, Anthony Weiner, Dennis Rodman and even Prince George made the cut.

Do you agree with the mag's choices for worst stars of the year? Tell toofab in the comment section below, and click "Launch Gallery" above to see some of our favorites from GQ's "Least Influential People of 2013" list !

Make sure to check out www.gq.com to see all 29 of their picks!