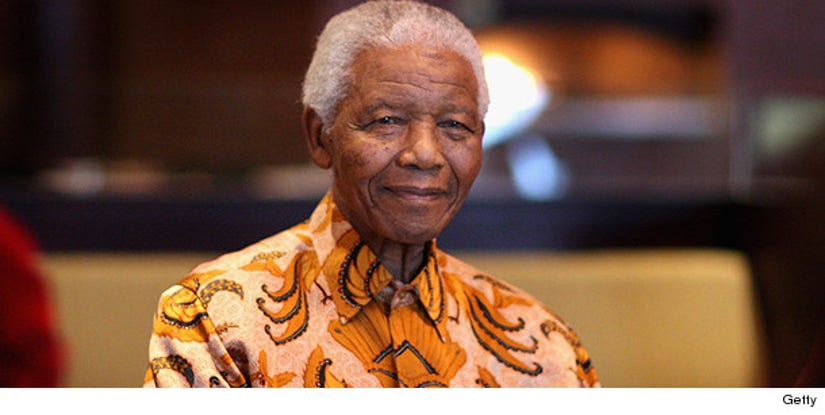 Nelson Mandela -- the man who motivated and led South Africa out of a system of racial segregation -- passed away on Thursday, he was 95.

"He is now resting. He is now at peace. Our nation has lost its greatest son. Our people have lost a father."

Coincidentally, Nelson's death was announced the same day as the Royal film performance of "Mandela: Long Walk to Freedom" -- both the Duke and Duchess of Cambridge were in attendance.

Over the past few months, Mandela had been battling a severe lung infection and was hospitalized numerous times.

The former South African president led one incredibly heroic life -- from freedom fighter, to prisoner and as most importantly, as the country's moral leader.

Nelson Mandela will be dearly missed. Stars have been turning to Twitter to share their reactions surrounding the loss the late political activist.

We'll keep updating the reactions below as more come in.

Kat Graham ‏@KatGraham
I learned that courage was not the absence of fear, but the triumph over it. - Nelson Mandela Rest In Peace

Alyssa Milano ‏@Alyssa_Milano
"There is nothing like returning to a place that remains unchanged to find the ways in which you yourself have altered." ~Nelson Mandela

Nancy Pelosi ‏@NancyPelosi
May the life of Nelson Mandela long stand as the ultimate tribute to the triumph of hope.

Michael Catherwood ‏@MikeCatherwood
I feel blessed to have shared the earth with Nelson Mandela. He was the pinnacle of character. He personified dignity.

Patti Stanger ‏@pattistanger
May the peace minister #NelsonMandela RIP as I'm sure the angels are dancing with joy tonight to get to hang with such a great man! Namaste

maria menounos ‏@mariamenounos
#BREAKING Nelson #Mandela has died. So heartbreaking. There is no one like him. #inspiration

Tyra Banks ‏@tyrabanks
@NelsonMandela, 95 powerful years on this earth yet freedom for INFINITY because of you. You are an angel that will live forever.

Quincy ‏@Quincy
RIP Nelson Mandela. He was the true definition of a #HERO.

XZIBIT ‏@xzibit
RIP Nelson Mandela, what an incredible journey. Thank you for everything you have shown us,and being a true hero. You will be missed. #truth

Russell Simmons ‏@UncleRUSH
Nelson Mandela was an angel walking on this earth. You were one the greatest teachers this world has ever known. We love you and we miss you

Gilles Marini ‏@GillesMarini
#NelsonMandela RIP. Not many warriors of freedom in this world but clearly He was one of them.

Kelly Osbourne ‏@KellyOsbourne
Today is officially one of the saddest days! The world has lost the most inspirational person to ever walk the earth rip #NelsonMandela

Shane West ‏@shanewest_
"@ryanAguzman: Rest in Peace to a great leader and inspiration to many #NelsonMandela . The world has felt your positive effect." True words

Busta Rhymes ‏@BustaRhymes
RIP 2 ONE OF OUR LAST TRULY GREAT KINGS AND GOD OF OUR UNIVERSE, THE LATE GREAT NELSON MANDELA!!! I WILL 4EVER LOVE U GREAT MAN & GREAT MIND

Katie Couric ‏@katiecouric34s
"If people can learn to hate, they can be taught to love." - #NelsonMandela, RIP & may your words live on...

Pau Gasol ‏@paugasol
Thankful to @NelsonMandela for having shown us so much wisdom and leadership. His legacy and example will always stay with us. RIP #Madiba

LA Reid ‏@LA_Reid
Nelson Mandela changed the world for all of humanity! May his blessed soul rest in peace.

Fergie ‏@Fergie
Meeting Nelson Mandela at his house in Johannesburg was a truly memorable moment in life for me. He was an angel.

bob saget ‏@bobsaget
Education is the most powerful weapon which you can use to change the world. ~Nelson Mandela

Richard Branson ‏@richardbranson
Today we lost not only a great man; we also lost one of the world's greatest leaders

Tyler Perry ‏@tylerperry
There were only 3 people that I wanted to meet in life, Nelson Mandela was one of them.

Sarah Michelle ‏@RealSMG
#RIP Nelson Mandela. The best example of a human being I can think of. The world is a better place because of you. Thank you

Reggie Bush ‏@ReggieBush
Man RIP Nelson Mandela. This is too much bad news

Al Gore ‏@algore
Today marks the passing of one of the world's great leaders and visionaries, Nelson Mandela. Farewell, Madiba.

Ryan Phillippe ‏@RyanPhillippe
Mandela was bouncing Ava, then two yrs old, on his knee & called her, "future leader". I couldn't believe it in that moment. I still can't.

Charlize Theron ‏@CharlizeAfrica
My thoughts and love go out to the Mandela family. Rest in Peace Madiba. You will be missed, but your impact on this world will live forever

oliviamunn ‏@oliviamunn
"To be free is not merely to cast off one's chains but to live in a way that respects and enhances the freedom of others." RIPNelsonMandela