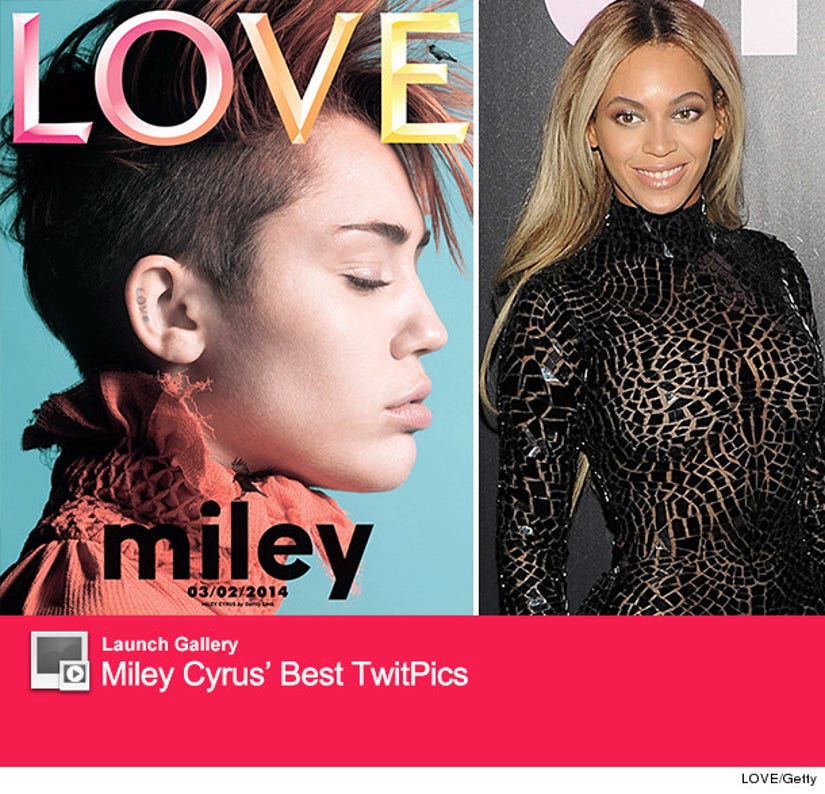 Miley Cyrus doesn't apologize for her crazy antics, but she also doesn't tolerate being misquoted!

In an interview in the March 2014 issue of LOVE magazine (via Perezhilton.com), the "Bangerz" singer reportedly claimed that she is the only female artist who can fill Beyonce's shoes right now.

"As Beyonce grows in motherhood and all the c**p it does to your body, it will create a vacuum for fresh young faces to rise up and no one else can properly fill that void right now," the pop starlet told the mag. "I'm the only white female singer that could fill that slot right now and do it right, you know."

"She's so talented and I think she's at the top of the game now but people are always looking for new blood and that's what I bring to the game now, new blood. I got the total package you know, the curves, the rhythm, and the voice. I'm just the best," she allegedly said.

But don't get mad at Miley just yet -- because the 21-year-old took to Twitter on Thursday to say she NEVER said it.

"That quote people MADE UP about Beyonce just made me lol! Imagine if I said I got 'the looks and the curves I'm just better!' Bahahahhaha," she tweeted, adding, "How are people allowed to make up s*** & then put quotes around it saying I said that s***! WTF!!?!"

Miley clearly isn't going to let this go without a fight.

"Don't worry. getting 2 the bottom of this s***. making the liar retract the statement. U can cause ALOT of drama but NOT between me & B!" she wrote.

For its part, Love Magazine say Miley never said those quotes to them either.

@MileyCyrus never said anything to us about Beyonce, the quotes were made up and we're trying to get to the bottom of where this came from