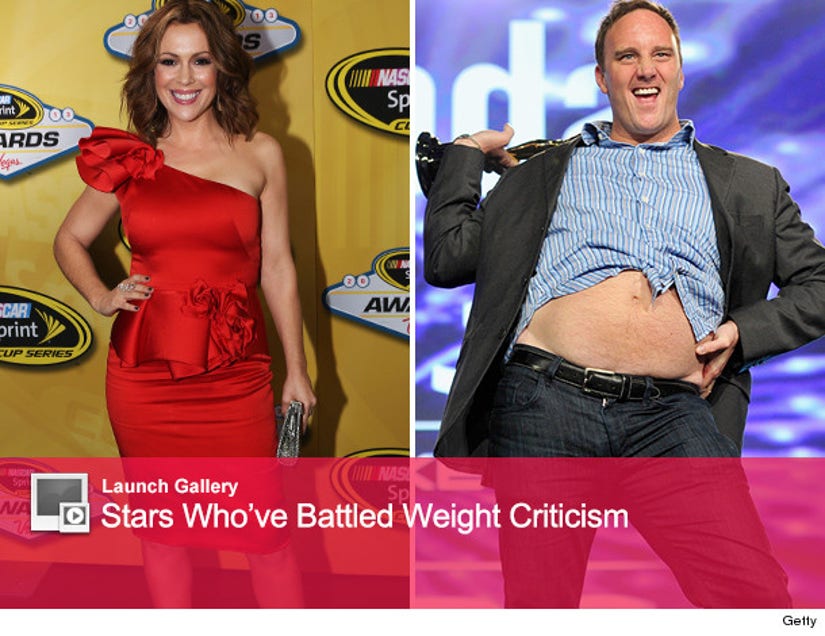 Jay Mohr was just trying to be funny, guys.

The comedian faced some major Internet backlash after he made fun of Alyssa Milano's weight during a recent radio interview.

"She's very tiny, in height," he said about her appearance at the NASCAR Spring Cup Seires Awards last month, an event he hosted. "It seems like she had had a baby and said, 'I don't really give a s–––' … I read it on her gut."

"Somebody sat in the director's chair was not wearing Spanx and I was like 'Jesus Christ!'" he added.

Once Alyssa found out what Jay had said, she took to Twitter -- and, we gotta say, she reacted perfectly.

.@jaymohr37 So sorry you felt the need to publicly fat-shame me. Be well and God Bless. Please send my love to your beautiful wife.

A week and a half later, Mohr finalllllly replied -- and said he was just kidding.

' @perezhilton @alyssa_milano She's stunning. I mistakenly thought the absurdity of what I was saying would have ben taken as a joke. #fail

He also posted a lengthy post on his official blog -- read it in its entirety below:

Comedians have a hole on their insides that can only be filled by generating constant content that is, many times, improvised in the moment. Unfortunately, in rare instances, it causes irreparable harm. I had thought (incorrectly) in an improvisational moment, that the incongruousness of my statements, when held up to the light of how beautiful Alyssa Milano is, would have been funny given that she is the size of a thimble. It wasn't funny. Knowing that Alyssa, as well as her family, friends, fans, and especially her husband, heard things that were hurtful from my mouth crushed me. She has always been one of the kindest, most caring and beautiful people this town has ever seen. I will not make excuses for what I said. Although I immediately removed that segment from my podcast, it still doesn't change the results. I know full well how much words can hurt people, having seen my wife get destroyed by the tabloids, and I am embarrassed that I didn't think before I spoke. Alyssa is an extraordinarily beautiful person—both inside and out. Alyssa is a mother, a wife, an actress, and a class act that should always be celebrated. Sometimes comedians go too far. I went too far. I cannot change what I said, but I can assure you that my heart is broken that I hurt her. I am very sorry. With the utmost sincerity, Jay Mohr

"Thank you. Apology accepted," she wrote on Twitter, adding "(She grunts while aggressively yet cautiously prying off her head-to-toe Spanx) #PassTheCookies."

Mohr's wife is actress Nikki Cox, who has had her fair share of tabloid scrutiny in the past over her changing looks.

See more stars who have been unfairly criticized about their weight in the gallery above.