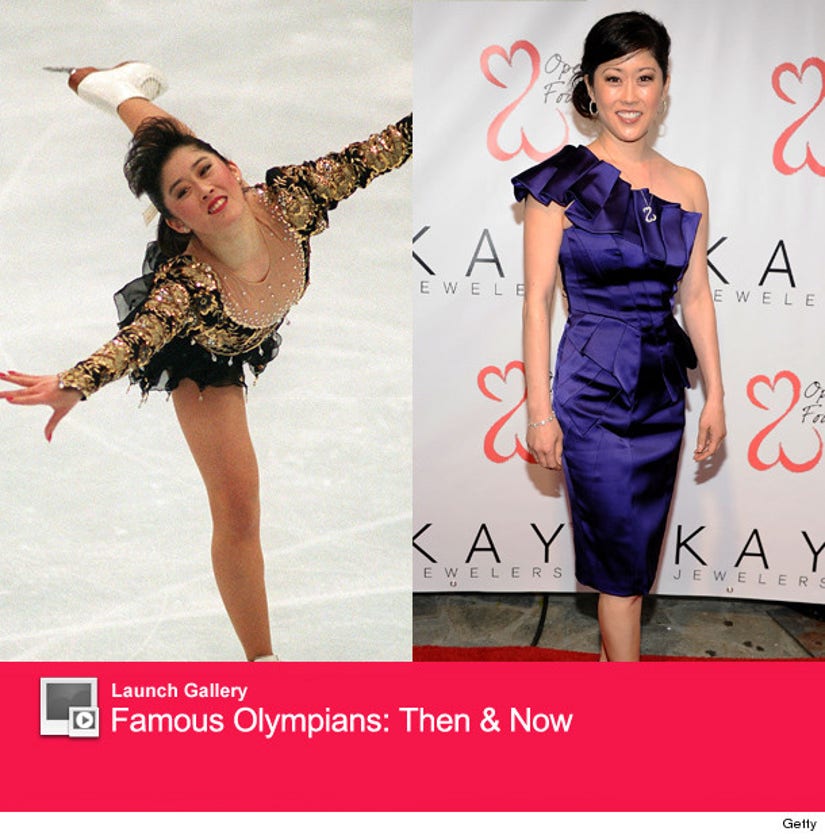 We all remember when Kristi Yamaguchi won Olympic gold for figure skating in 1992. And, although you won't catch her competing on the ice now, she's not slowing down!

America's favorite ice skating champ won the mirrorball trophy on the sixth season of "Dancing with the Stars," she has an active-wear clothing line, Tsu-Ya, and has been named co-captain of Team Kellogg's.

toofab's Rachel Hoffman caught up with Kristi to talk about everything from her future on "Dancing with the Stars" to her Olympic medal predictions.

Can we expect to see you on “Dancing with the Stars All Stars?"

Kristi: It's hard to say, it was a huge commitment. The first experience was so amazing. Dancing with Mark Ballas – we just had a great time. It was perfect in that stage of my life. Never say never, but it would be hard now.

We've heard the training schedule is very intense. Break down your daily routine.

Kristi: It was between 4 and 6 hours a day. On top of that, we had costume fittings and interviews and press events, so it's pretty non-stop the whole time you're on the show.

Was it easier for you to transition from ice to the dance floor?

Kristi: It was pretty different, and I was surprised at that. I love body movement and expression to music, and I think that helped. But, I think moving your feet in such a different way than what we do on the ice was the biggest challenge. To learn the different essences and styles of each dance, there are so many rules! It was a lot to take in.

What was your favorite experience from the Olympics?

Kristi: I would probably have to say, walking in the opening ceremony and joining all of the athletes from the U.S. team. Just really feeling like a big part of the team.

What did it feel like to take home the gold medal?

Who are the front-runners in figure skating now?

Kristi: In the women's event, there's an interesting situation with Yuna Kim coming back to compete. If she's healthy and skating well, she will be the one to beat. I think Mao Asada of Japan is the heir apparent. She's really put in a lot of hard work and has grown so much as a skater in the last four years. I think those two will probably battle it out again. But, I think Ashley Wagner has a chance of being on the podium – she's right up there with those girls!

Who was your biggest inspiration during the Olympics?

Kristi: My coach, Christy Ness, was a huge inspiration. In figure skating, you have a very tight bond with your coach. As far as other skaters, Brian Boitano was a huge mentor and someone who I trained with. I got to see how he prepared and what it really took to reach for your dreams.

Kristi: I haven't spoken to him directly, but I sent him a message. He's one of my best friends. He knows I'm there for him and I support him all the way. He's a lot of things – he's a champion, a brother, a cook book writer -- it's just a small part of who he is.

It's been 20 years since the "whacking" incident between Nancy Kerrigan and Tonya Harding. How do you think the attack changed the sport?

Kristi: The change you saw was immediately after when there was a rush of interest in the sport. It was pretty intense for a while, but it eventually died off. The sport continued to be popular for legitimate reasons. I don't think it really changed our sport, other than maybe a little more security.

Tell me about Team Kellogg's.

Kristi: I'm honored to be a part of Team Kellogg's as one of their co-captains. It's an amazing group of athletes, and to see their "Great Start" stories is very inspiring. Every time one of the stories is shared, it translates into a breakfast for someone in need. Knowing that up to two-million breakfasts will be served to a child-in-need because of this program is really great.

Click "Launch Gallery" above to see more famous Olympians, then and now!