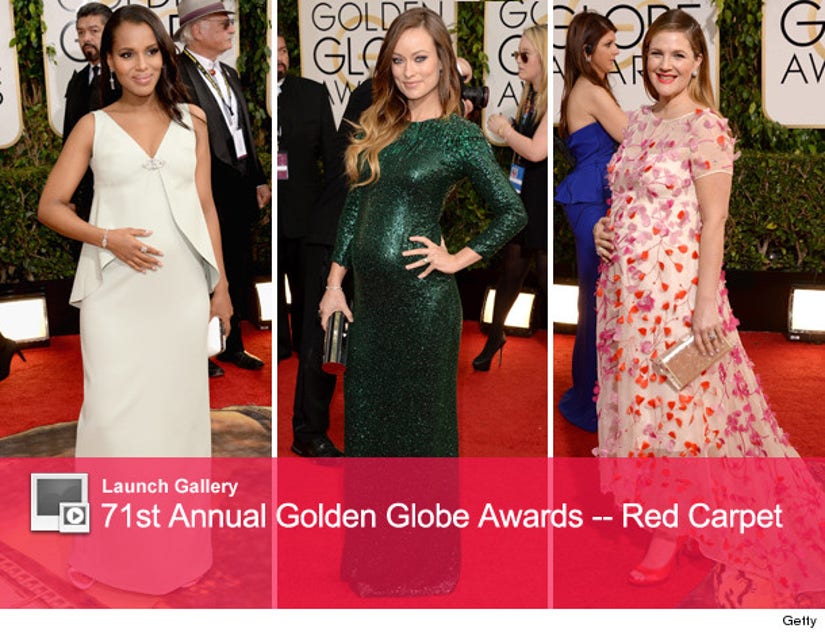 Hollywood's expecting moms were glowing at the Golden Globe Awards on Sunday night.

Kerry Washington confirmed her pregnancy news as she stepped out on the red carpet.

The "Scandal" star looked stunning in a winter white Balenciaga dress, telling E! News as she rubbed her belly, "I feel like I have the best date of the night, my little accessory here."

The 36-year-old actress is nominated for Best Actress in a Drama Series for her role as Olivia Pope on the hit ABC show.

Olivia Wilde was our best dressed pregnant starlet of the night in a form-fitting emerald green sequin Gucci gown.

The actress is at the awards show to support two films she was in last year, "Rush" and "Her," which are both nominated for Best Motion Picture -- "Rush" for Drama, "Her" for Comedy or Musical.

Drew Barrymore, who is a little farther along than the other two, donned a pink floral Monique Lhuillier gown.

Who do you think is the best dressed pregnant star? Tell toofab in the comment section below, and click "Launch Gallery" above to see more celebs on the Golden Globes red carpet!