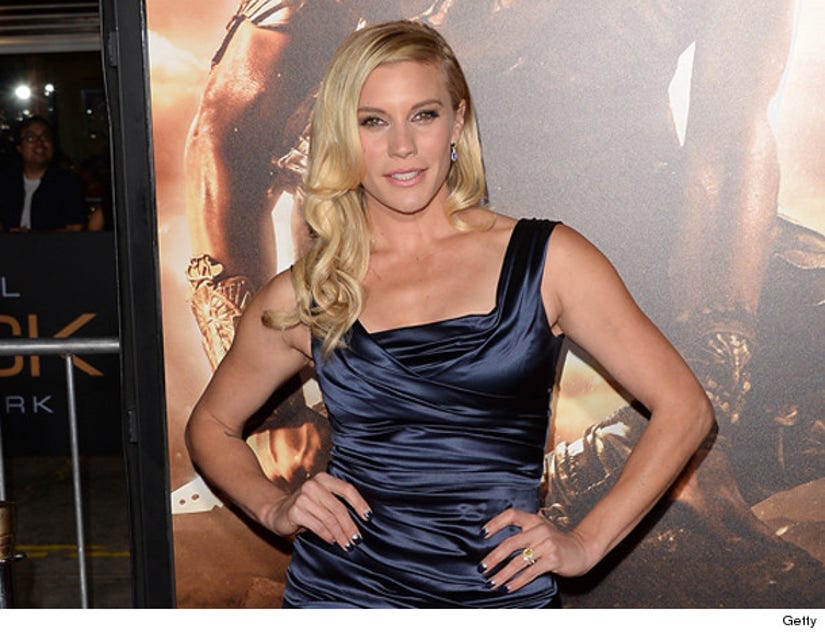 The actress won over the geek community with her role as fearless pilot Starbuck in "Battlestar Galactica." Since then, she's continued to charm her fans with her work on "24," "Nip/Tuck," "Robot Chicken" and her recent series on A&E, "Longmire."

Sackhoff is now moving into feature film roles, including "Riddick," where she stars as another weapon-wielding badass opposite Vin Diesel.

toofab's Rachel Hoffman caught up with Katee to get the scoop on everything from comic book movie roles to stripping down for her Acting Outlaws calendar.

Your character in "Riddick" is pretty tough -- how did you prepare for the role?

Katee: Physically, I wanted to add some weight to my body. Every time I heard they had cast another guy, they turned out to be massive. I knew the only way that Dahl would be believable – for people to believe that these guys were slightly intimidated by her – was only if I put some weight on. So, I added about 15 pounds of muscle. I got pretty big!

What's your normal workout routine when you're not training for a role?

Katee: I love to run, and I actually run quite a bit. Depending on the day, I like to mix up my workouts. I'll work out with my trainer twice a week, and I'll do some Power Pilates and might throw in some yoga. I love to row also. The main thing for me is just to move every single day for 30 minutes to an hour.

Katee: He's amazing! From the second I met Vin, we got along really well. I have a lot of respect for him as an actor and as a producer. He's a really great guy, and he gives 110 percent at work every single day. He's just a rare person in the business, where they're as nice as you would ever want them to be.

You've expressed interest in everything from Harley Quinn to Captain Marvel. Have there been any serious talks?

Katee: I think as a woman in action in the business, you would be stupid not to express interest. Any female action role that presents itself as an opportunity – I would throw myself at! There have been some talks but nothing specific.

If you could play one superhero, who would it be?

Katee: I would never be able to pick -- there's so many! I grew up as a fan of comic books, and I've been reading them for so long, that I've never felt an affinity toward just one. I've loved Harley Quinn since I was a kid. It's hard to pick just one when you know that none of them are in scripts right now! 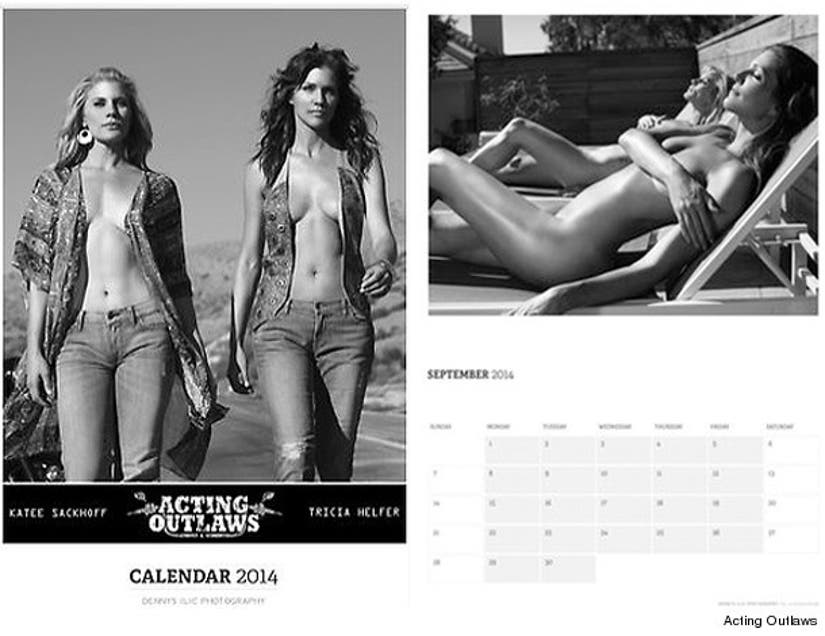 Tell me about Acting Outlaws.

Katee: It's a company that Tricia Helfer and I started four years ago. One of the things this business provides you is the opportunity to have a louder voice – to be able to help people and affect change. So, we started a company that would help us do that, while at the same time, doing something that we love to do – riding motorcycles!

You're getting a lot of buzz for your calendar, which features beautiful photos of the two of you -- sometimes clothed, sometimes not. What was it like to shoot the racy pics?

Katee: Tricia and I had been approached before to do a calendar, where we wouldn't own any of it. But, we decided if there was an interest there, we would do it ourselves. It was fun! It was weird for me. For Tricia, it wasn't weird at all because she comes from a modeling background. But for me, getting naked with a huge crew around wasn't the most comfortable thing. We had fun with it though.

You seem pretty fearless, is there anything you're afraid of?

Katee: Flying! Since 9/11, I have an intense fear of flying.

Let's talk about "Longmire" – How did it come about for you? Had you been looking to do another TV show?

Katee: Not at all! I never wanted to do television again! After "24," I wanted a break. I wasn't even looking for pilots, and two projects came to my attention. My manager said to me, 'It's my job to tell you when you're being stupid.' I read "Longmire," went in and read for the producers and liked them so much as people, I signed on.

What was it about this character that you were able to identify with?

Katee: I thought she was the most normal character that I would get the opportunity to play. That was the main thing! It was enough of a departure from what I normally do, but close enough to home, that the fan base wouldn't be disappointed.

You've played tough girls in "Battlestar," "Bionic Woman," "Riddick" and "24." Will we ever see you in a romantic comedy?

Katee: Not for lack of trying! I would like to. You get pigeon-holed in the business, and you really have to prove yourself in any other genre. For me, it's just about having the opportunity line up with the amount of work I put in.

Check out the video below to see a behind-the-scenes look at Katee and Tricia's Acting Outlaws calendar shoot!

Catch more of Katee in "Riddick," which lands on home video January 14.