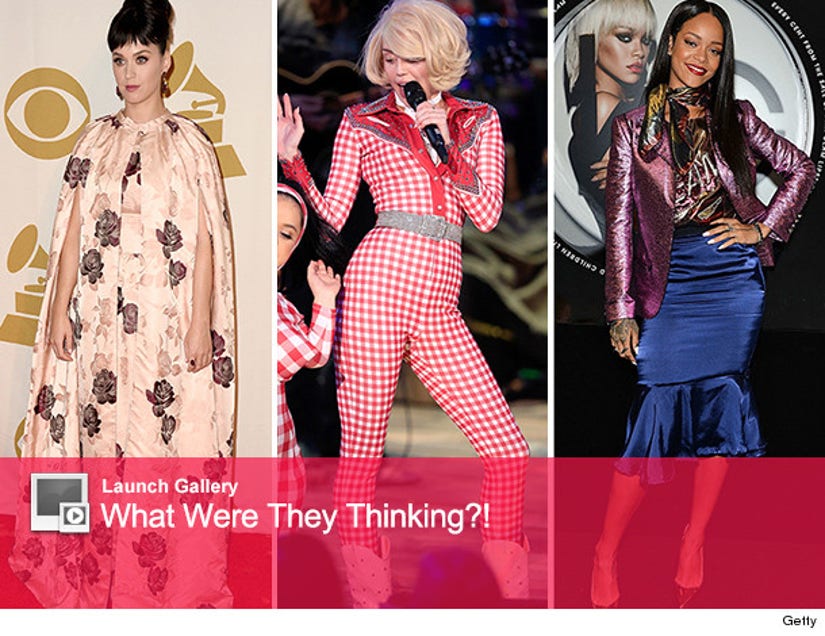 A floral drape-cape combination, a plaid jumpsuit and a flight attendant-inspired ensemble -- stars are rocking all the wrong trends this week!

Katy Perry caught everyone's attention on the red carpet of a Grammys event honoring The Beatles in Los Angeles on Monday -- and not in a good way.

The "Dark Horse" singer donned a floral Dolce & Gabbana gown that was an unflattering mix of drapes and a cape.

Miley Cyrus earned the top spot on our toodrab list this week for the gingham onesie that she wore while performing on MTV's "Unplugged."

The "Bangerz" songstress paired the red and white plaid jumpsuit with a tousled blonde wig. She also made her mini-me wear a matching skintight suit -- with a hood!

The 21-year-old was paying homage to her "fairy godmother" Dolly Parton, but we don't think the "Jolene" singer would be flattered by the comparison.

And, Rihanna showed up at MAC's Soho store in New York dressed as a flight attendant! Not really, but doesn't she look like she's ready to fly the friendly skies?

Besides that little ruffle on the skirt and the sparkle to the blazer, the "Diamonds" singer is basically wearing a Virgin America flight attendant's uniform.

But they weren't alone -- see more of this week's worst dressed stars in the gallery above!