It's the end of an era in late night!

Jay Leno said a tearful goodbye to "The Tonight Show" on Thursday night, with a star-studded final farewell episode full of celeb cameos, jokes, and memories from his 22 years behind the desk.

The funnyman brought his show full circle with Billy Crystal, who was his first guest in May 1992 and his final guest last night. Crystal gathered some famous friends for the special occasion, calling on Oprah Winfrey, Jack Black, Kim Kardashian, Carol Burnett and more for a musical tribute to Jay with a "Sound of Music" song parody. 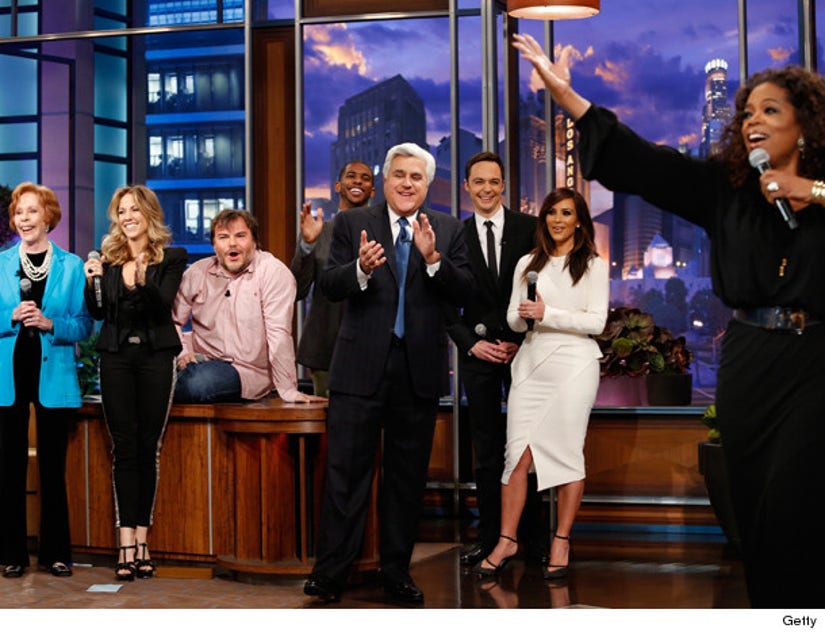 At the end of the show, the comedian cried as he thanked his viewers, his guests and his longtime crew.

So, how does he feel about Jimmy Fallon taking his seat?

"It's fun to kind of be the old guy, sit back here and see where the next generation takes this next institution. It really is," he admitted. "It's been a great institution for 60 years. I am so glad I got to be a part of it, but it really is time to go and hand it off to the next guy. It really is. In closing I want to quote Johnny Carson, who was the greatest guy to ever do this job. He said, 'I bid you all a heartfelt goodnight.'"

Check out the video above to see what else the 63-year-old said in his touching final farewell!

Leno turned to Garth Brooks to end the episode on a high note with a special rendition of "Friends in Low Places." In the final minutes of the episode, he joined the singer onstage, looked at the camera, and said, "Thank you, everybody. Watch Jimmy Fallon. See you later. I'm coming home, honey."

What do you think of his tearful goodbye? Sound off below!