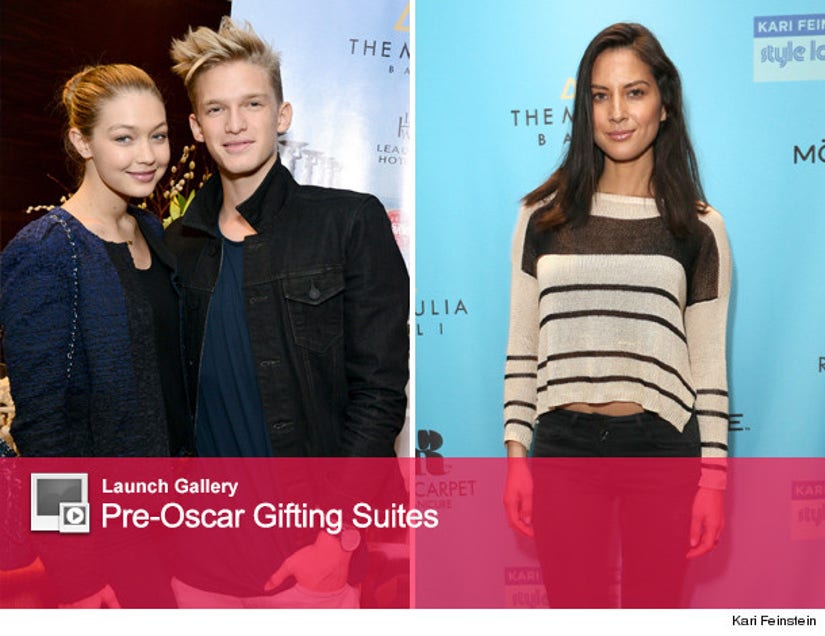 Ever wonder what's inside the pre-Oscar swag bags?

toofab's Rachel Hoffman got the celebrity treatment, getting a sneak peek into what Hollywood's hottest stars scored at the Oscar Gift Lounges.

So, what did these celebs take home?

Olivia picked up the Red Carpet Manicure at-home gel manicure kit, and she was having her personal manicurist do her nails with it before she headed out to the Armani party.

Sport Illustrated swimsuit model Gigi Hadid, who came to the lounge with her boyfriend Cody Simpson, scored a trip for two to the Mulia Resort, Nusa Dua Bali. Cody's mother was also overheard saying he's been meeting with the producers of "Dancing With the Stars." Do you think he's set to compete next season!?

Actress Kristin Chenoweth stopped by to see Crystal Light and said that the only way she drinks water is with their products.

Carrano Shoes gifted Casper Smart a pair of shoes called, the Jennifer Lopez, which he couldn't wait to give to her. How cute!

Next stop on our gifting suite tour? The TMG International suite at the Beverly Hilton Hotel in Beverly Hills.

They were also treated to massages, brow shaping and OPI manicures inside the suite!

Want even more Oscar news? Check back with toofab on Sunday to see all the stars on the red carpet on Hollywood's biggest night.