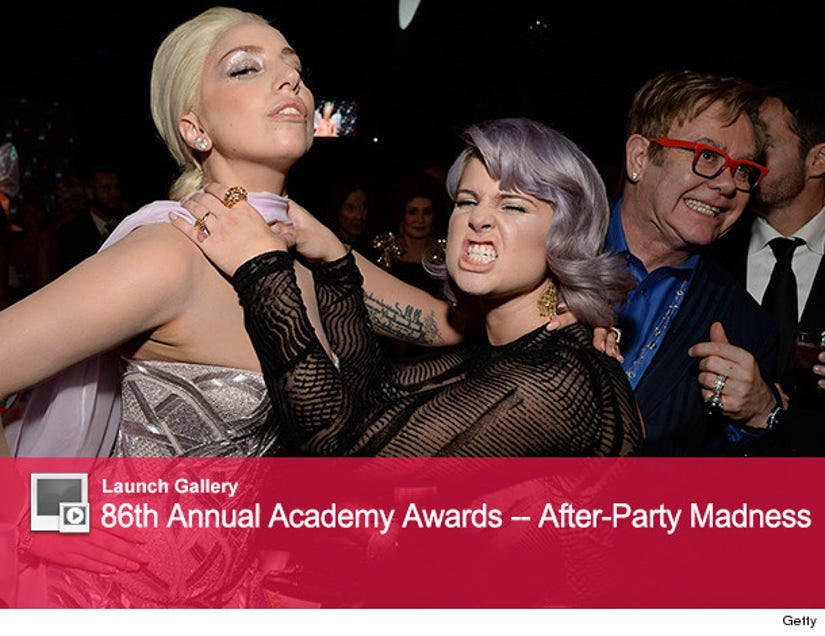 The singer and the "Fashion Police" star both attended Elton John's Oscar party on Sunday in Los Angeles and posed for one hilarious photo together.

In the candid sanp, Kelly's seen jokingly chocking the "Applause" songstress with Elton smiling in the background.

"#peace at last @ladygaga," Osbourne captioned the funny photo, which she posted on Twitter. Even though the two have had a very public feud over the last few years it seems like they've finally put the drama behind them.

Kelly made some backhanded comments about Gaga last year, calling her a "butterface" to which the pop star's fans, her "little monsters," sent Kelly death threats via Twitter.

"I loved Lady Gaga. I totally believed in everything she stood for, until I realized she's a great big hypocrite," she said in the July issue of Cosmopolitan. "Don't say, 'When you see bullying, intervene,' while letting your fans send me death threats. If my fans did that, I would not stand for it."

The "Born This Way" singer tried to end the feud in October when she sent Kelly's mom Sharon Osbourne a birthday cake for her 29th birthday.

"Not to be ungrateful but why would you send me a birthday cake via my MOTHER in a country half the would away? #JustSendItToME #LoveNotWar," she tweeted about the gesture.

But the purple haired beauty later apologized. "@ladygaga I acted like a child last night. Just not into publicity stunts call me & we will end this like adults I don't want 2 fight anymore."

Well, we're happy to see that the two stars are back on good terms -- what do you think about the candid snap?

Tell toofab in the comment section below and make sure to check out even more Oscar party pics in the gallery above!